Making Maggots and Hookworms Work For You

No, this isn’t a tale about politics in the U.S. - that would have to include leeches and bedbugs to be fair and balanced. This week’s news brings us the story of genetically-modified maggots that aid in healing and a protein that may allow humans to live and survive with hookworms inside them. Maybe tales about politics would be better?

Maggots – sterile, lab-raised green bottle fly larvae – are used for maggot debridement therapy (MDT). The maggots are applied to non-healing wounds like diabetic foot ulcers where they clean the wound, remove dead tissue and help kill germs. This proven therapy has been enhanced by researchers at North Carolina State and Massey University in New Zealand who genetically engineered maggots to produce and secrete a human growth hormone that shortens wound healing time. 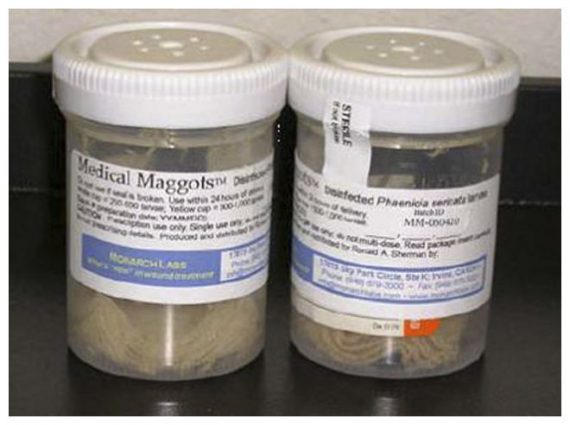 The flies were engineered to make human platelet derived growth factor-BB (PDGF-BB). The enhanced healing power of the GMO maggots will be used in low-income countries where people with diabetes can’t afford or get access to more conventional treatments.

That’s the same reason why researchers in the School of Medicine at the University of California, Riverside, are working on new treatments for hookworms - soil-transmitted parasitic nematodes that infect an estimated 2 billion people worldwide in mostly developing countries where sanitation is poor and people walk barefoot. The hookworms eventually travel to and damage the lungs, then do the same thing to the gut. Drug treatment is expensive, while allowing the body’s immune system to fight the parasite makes the person just as sick.

However, the hookworm can be in a body for years without causing harm. It’s a balance that allows both the worms and the host to live. Meera G. Nair, Ph.D., helped isolate RELMalpha, an immune protein in mice that does not fight infection but instead protects body tissues from it. Mice bred without RELMalpha fell victim to hookworm infections. Nair says humans have a similar protein called resistin that is believed to perform the same function.

If you had a choice between having a parasite in your body or you dying from trying to kill it, you would choose to have the parasite live in your body.

That’s Nair’s hope as she pursues using resistin to allow humans to live in harmony with their hookworms.

For more information on making maggots and hookworms work for you, see the NC State study in the journal BioMed Central and Nair’s study in Infections and Immunity.

For more information on political maggots and hookworms, turn on the TV to any news channel.