Are you ready for some immortality? A manuscript containing Isaac Newton’s alchemy formula for the philosopher’s stone – the legendary ‘elixir of life’, metal transmuter and key to immortality - has been rediscovered. Will the new owners keep it for themselves, sell it to the highest bidder, share it with all mankind or make a movie?

Let’s start with what the philosopher’s stone is or is reputed to be (for the few who haven’t heard of Harry Potter). The knowledge of the stone – actually a chemical substance capable of, among other things, turning ordinary metals into gold – was said to have been given to Adam by God. Its additional powers of rejuvenation and immortality were considered to be a reason for some long-lived biblical persons. Plato talks about a prima material or ‘first matter’ that the four elements are derived from and is believed to be the key ingredient in the alchemy of the philosopher’s stone. The process of creating the stone is called the Magnus Opus or the Great Work and was believed to have four stages relating to colors: black, white, yellow and red.

Blah, blah, blah. What about Newton’s recipe for immortality?

According to Chemistry World, the handwritten manuscript showed up at an auction in Pasadena, California, on February 16th where it was purchased by the Chemical Heritage Foundation (CHF) in Philadelphia. The CHF, a science history institution, will have the original Latin manuscript online. That should give you a hint that it may not be the formula for the ‘elixir of life’ as first billed. 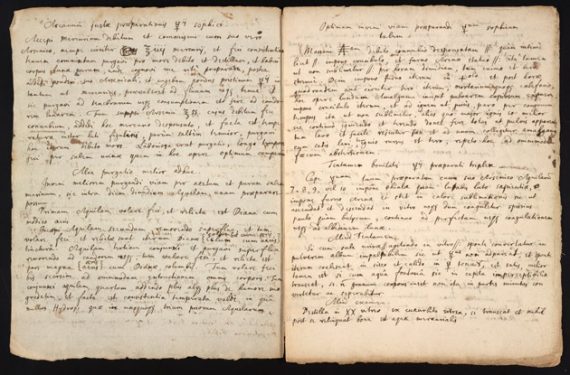 The manuscript is titled Preparation of the [Sophick] Mercury for the [Philosophers'] Stone by the Antimonial Stellate Regulus of Mars and Luna from the Manuscripts of the American Philosopher. ‘Sophick’ Mercury refers to philosophic mercury, a synonym for the stone. Newton copied the recipe from American chemist George Starkey (the American philosopher mentioned in the title), who published under the pseudonym Eirenaeus Philalethes and who some consider to be America’s first scientist. It’s assumed that Newton tried the recipe in the late 1600s because there are notes and corrections to Starkey’s original formula and a Newtonian recipe on the back for distilling lead ore.

Since Newton isn’t here, it’s a good bet he didn’t find the secret to immortality and, since his descendants don’t control the world’s money supply, it’s safe to assume he didn’t transmute any lead into gold. The significance of the manuscript is that it’s in Sir Isaac’s own hand and shows that he was an alchemist as well as a mathematician and physicist.

No gold, no elixir, no immortality. Time to resume the hunt for some unicorn’s blood.

The Mystery of Shakespeare’s Missing Head