Not Exactly The Biggest Bigfoot

On October 22, 1870, a California-based newspaper, The Antioch Ledger, shared with its readers a bizarre story. It told of one man's encounter with a pair of Bigfoot that were not quite so big, after all. The source of the story was "an old hunter" who, according to the man himself, encountered the creatures in the previous year, 1869. The location was the Orestimba Creek, which is a tributary of the San Joaquin River, a 366-mile long river that runs through the San Joaquin Valley. In the man's very own words: "I saw in your paper, a short time since, an item concerning the 'gorilla,' which was said to have been seen in Crow Canyon and, shortly after, in the mountains at the head of Orestimba Creek. You sneered at the idea of there being any such 'critters' in these hills, and, were I not better informed, I should sneer, too..."

He continued: "I positively assure you that this gorilla, or wild man, or whatever you choose to call it, is no myth. I know that it exists, and that there are at least two of them, having seen them both at once, not a year ago. Their existence has been reported at times for the past twenty years, and I have heard it said that, in early days, an ourang-out-ang [sic] escaped from a ship on the Southern coast; but the creature I have seen is not that animal, and if it is, where did he get his mate? — import her, as the Web-foots did their wives?"

The man then got to the heart of the story: "Last fall I was hunting in the mountains about 20 miles south of here, and camped five or six days in one place, as I have done every season for the past 15 years. Several times I returned to camp, after a hunt, and saw that the ashes and charred sticks from the fireplace had been scattered about. An old hunter notices such things, and very soon gets curious to know the cause. Although my bedding and traps and little stores were not disturbed, as I could see, I was anxious to learn who or what it was that so regularly visited my camp, for clearly the half burnt sticks and cinders could not scatter themselves about." 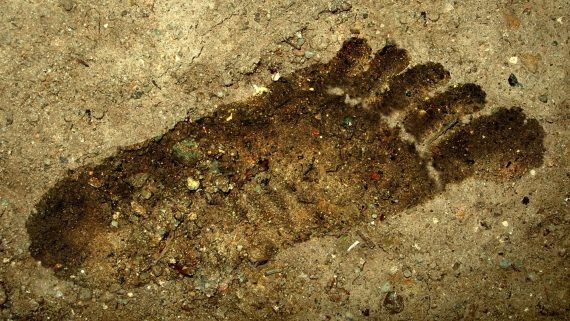 The mystery was about to get even more mysterious, as he duly noted: "I saw no tracks near the camp, as the hard ground covered with leaves would show none. So I started in the circle around the place, and 300 yards off, in damp sand, I struck the tracks of a man’s feet, as I supposed, bare and of immense size. Now I was curious, sure, and I resolved to lay for the barefooted visitor. I accordingly took a position on the hillside, about 60 or 70 feet from the fire, and, securely hid in the brush, I waited and watched. Two hours and more I sat there and wondered if the owner of the feet would come again, and whether he imagined what an interest he had created in my inquiring mind, and finally what possessed him to be prowling about there with no shoes on."

Finally, the old hunter caught sight of his quarry. It was surely not what he was expecting: "The fireplace was on my right, and the spot where I saw the track was on my left, hid by the bushes. It was in this direction that my attention was mostly directed, thinking the visitor would appear there, besides, it was easier to sit and face that way. Suddenly I was surprised by a shrill whistle, such as boys produced with two fingers under their tongues, and turning quickly, I ejaculated: 'Good God!' as I saw the object of my solicitude standing beside the fire and looking suspiciously around. It was the image of a man, but could not have been human."

"I was never so benumbed with astonishment before. The creature, whatever it was, stood fully 5 feet high, and disproportionately broad and square at the fore shoulders, with arms of great length. The legs were very short and the body long. The head was small compared with the rest of the creature, and appeared to be set upon the shoulders without a neck. The whole was covered with dark brown and cinnamon colored hair, quite long on some parts, that on the head standing in a shock and growing close down to the eyes, like a Digger Indian's." 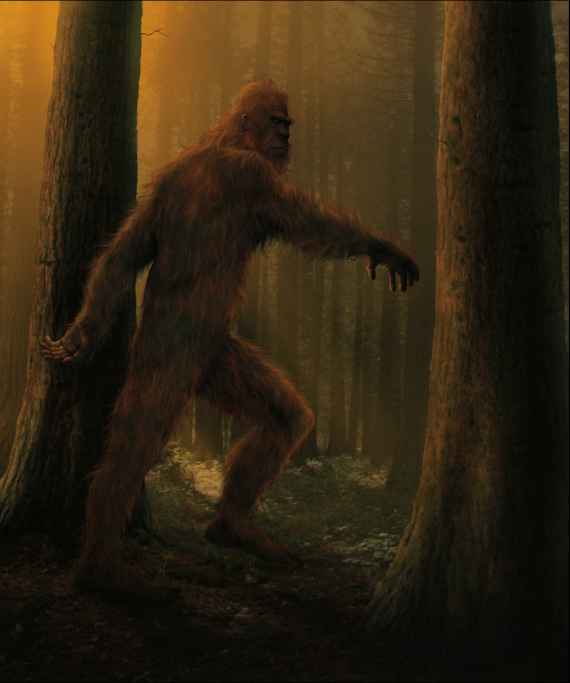 He continued: "As I looked he threw his head back and whistled again, and then stopped and grabbed a stick from the fire. This he swung round, until the fire at the end had gone out, when he repeated the maneuver. I was dumb, almost, and could only look. Fifteen minutes I sat and watched him as he whistled and scattered my fire about. I could easily have put a bullet through his head, but why should I kill him? Having amused himself, apparently, as he desired, with my fire, he started to go, and, having gone a short distance returned, and was joined by another - a female, unmistakably when both turned and walked past me within 20 yards of where I sat, and disappeared in the brush.

"I could not have had a better opportunity for observing them, as they were unconscious of my presence. Their only object in visiting my camp seemed to be to amuse themselves with swinging lighted sticks around. I have told this story many times since then, and it has often raised an incredulous smile; but I have met one person who has seen the mysterious creatures, and a dozen of whom have come across their tracks at various places between here and Pacheco Pass. The above is strictly correct. Yours, etc. An Old Hunter."

Bigfoot? Quite possibly. There is, however, the matter of the height of the beasts. Or, rather, their lack of height. We're told the male was only around five-feet tall, and it seems reasonable to assume that if the female was much taller, the hunter would have said so. Juveniles? Maybe.

The Shape Shifters: UFOs, Their Many Shapes, and Misleading Names