Are you ready for a real Jurassic Park? Fossil remains of a female Tyrannosaurus Rex found in Montana show that she was pregnant and an unusual bone may contain preserved DNA.

The story is published in the current edition of Scientific Reports but actually begins in 2005 when author and North Carolina State paleontologist Mary Schweitzer found a medullary bone in the femur of a 68 million-year-old T. Rex fossil from Montana. The medullary bone is unique to female birds and found only during times right before and during egg laying because its temporary purpose is for shell-making, says co-author Lindsay Zanno, an N.C. Museum of Natural Sciences paleontologist.

It's a special tissue that is built up as easily mobilized calcium storage just before egg laying. The outcome is that birds do not have to pull calcium from the main part of their bones in order to shell eggs, weakening their bones the way crocodiles do.

The medullary bone is only present in pregnant females for 3-4 weeks so it’s extremely rare to find one in a fossil. In modern birds – descendants of T. Rex and other theropod dinosaurs – the bone contains keratan sulfate. Schweitzer recently ran tests on the T.Rex bone and found evidence of its presence, thus confirming that this T. Rex was a pregnant female. 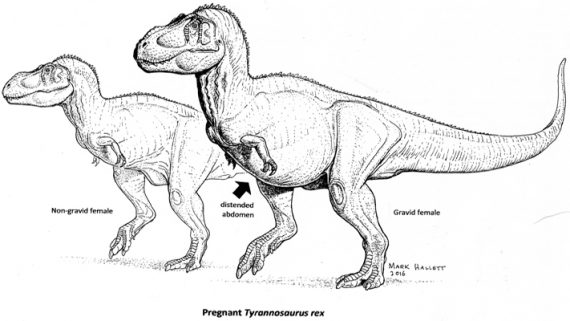 That’s all exciting and interesting, but what about the DNA? It turns out that it's this type of bone that could retain preserved DNA. Lindsay Zanno is cautiously optimistic.

Yes, it's possible. We have some evidence that fragments of DNA may be preserved in dinosaur fossils, but this remains to be tested further.

DNA or not, the fact that it’s a fairly complete skeleton of a confirmed pregnant female T. Rex, about 16 years old when she died, will give researchers new insight on the life and behavior of female dinosaurs, says Zanno.

It’s a dirty secret, but we know next to nothing about sex-linked traits in extinct dinosaurs. Dinosaurs weren’t shy about sexual signaling, all those bells and whistles, horns, crests, and frills, and yet we just haven’t had a reliable way to tell males from females. Just being able to identify a dinosaur definitively as a female opens up a whole new world of possibilities. Now that we can show pregnant dinosaurs have a chemical fingerprint, we need a concerted effort to find more.

Bells and whistles? Looks like they’ll need some new sound effects in the next Jurassic Park movie.