Storks Give Up Migrating to Eat Junk Food

Are birds becoming more like humans? White storks that used to migrate annually from Europe to Africa for the winter are opting to stay home and eat junk food and garbage at landfills. Do they sit on discarded couches and stare at broken TV sets too?

A new study on bird migration (which may be the last if this keeps up) was conducted by researchers from the University of East Anglia in Norwich, England. Lead by Dr. Aldina Franco from the School of Environmental Sciences, they focused on Portugal’s white stork population, which has grown from just 1,187 birds in 1995 to over 14,000 today. Before the 1980s, every stork in Portugal migrated to Africa in the winter. Today, those 14,000 are easy to count because 80 percent of them now live and nest year-round near landfills. 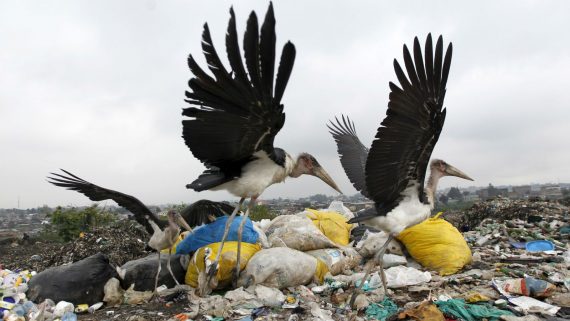 According to the study published in the journal Movement Ecology, the researchers put GPS devices on 48 white storks and tracked them for a few years. They found that the storks’ primary flight path was between nests and landfills. While they generally preferred the closest one, some storks traveled up to 48 km (30 miles) to visit a landfill that served their favorite kind of stale French fries.

How has this affected the storks, Dr. Franco? Are they developing bellies?

We found that the landfill sites enable year-round nest use, which is an entirely new behaviour that has developed very recently. This strategy enables the resident birds to select the best nest sites and to start breeding earlier.

White storks aren’t the only birds giving up on migrating. North America turkey vultures and Canadian geese have also stopped. While they’re not hanging around landfills, these birds are now finding a year-round supply of insects and plants due to warming caused by climate change. 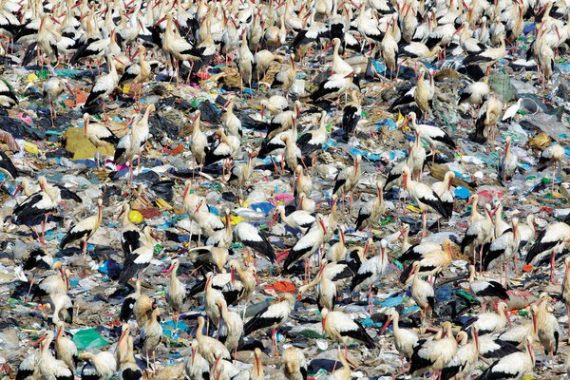 Just when the white storks are getting used to being couch potatoes, they may have to go back to migrating. Under new EU Landfill Directives, landfills in Portugal are scheduled to replaced by new facilities where food waste is handled indoors or under cover.

Let’s hope those junk food bellies don’t cause too much drag on the storks’ next flight to Africa.