Study Shows How to Win at Rock-Paper-Scissors

That didn’t work? Then always choose one of the three absolutely randomly every time.

Still not working? Getting frustrated? Aha! That’s the problem, according to researchers from the University of Sussex in the UK and Ryerson University in Canada whose study on “cyclic irrational decisions in Rock, Paper, Scissors” was just published in Scientific Reports.

Played randomly, rock-paper-scissors (RPS) is strictly a game of chance, so making every choice completely randomly is the way to win, or at least break even. Of course, Las Vegas has gotten rich on the fact that humans are not random and make different emotional and irrational decisions depending on whether they’re winning or losing. The title of the study gives their conclusion: “Negative outcomes evoke cyclic irrational decisions in Rock, Paper, Scissors.”

Thirty-one undergraduate students played 225 games of RPS against a computer programmed to play randomly. The study found a number of interesting tendencies that caused the human test subjects to lose consistently to the computer. 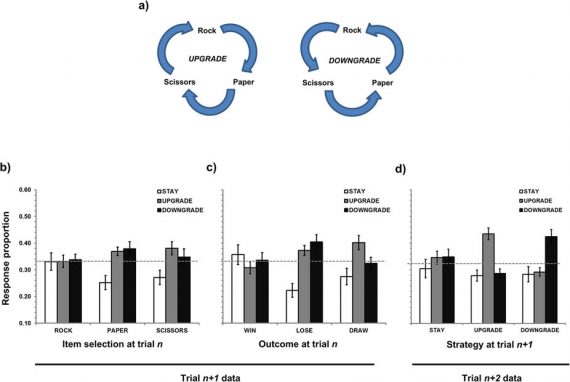 The biggest finding was that the humans used a 'win-stay, lose-shift' strategy, which means those who won a round tended to play the same item in the next game while those who lost or drew tended to shift to one of the other two items. A second interesting observation is that the shifters ‘upgraded’ (say from rock to paper) if they were in a draw with the computer but ‘downgraded' (say from rock to scissors) if they lost. Finally, the shifters tended to shift to rock most often.

Now that you know why you lose at rock-paper-scissors, how can you win without getting a random-number-generating chip implanted in your brain? (If that’s your plan, maybe you shouldn’t be playing RPS for money)

First, keep your cool – it’s just a game. Second follow this plan after the first game:

If you can’t remember it, write it on your hand – not the one you play with! If you get flustered, go with paper because most people choose rock.

Better yet, stick with beer pong.