Two identical heads, four eyes, two mouths, four legs and wool. No, it’s not a pair of twin models showing the latest in sweater fashions. A farmer in China has unveiled a two-headed lamb born recently in Leshan, Sichuan Province.

Not much information is available about the unusual lamb outside of the video, which was reportedly taken on March 14th, 2016. The two-headed lamb is in a yard with other normal lambs but there’s no indication they’re related – other than they’re black, they’re lambs and they’re living on the same farm.

The two-headed lamb is seen walking, which must be quite an accomplishment when you consider those legs may be getting instructions from two brains and visuals from two pairs of eyes on different sides of its head. It also is trying to eat both from the mother’s supply and a bottle, another good sign.

This is the second well-publicized two-headed creature born in China in just a month. In February, a two-headed calf was born in Linshui county in … uh-oh … Sichuan Province! Could there be a connection?

Possibly. Sichuan is known as the "Province of Abundance" because of its plentiful and productive farmlands, pork farms and silkworms. It is also a leading source of minerals - such as titanium, vanadium and cobalt – and natural gas. Not surprisingly, that combination makes it a center for many heavy industries, high tech factories and defense facilities.

All of the fertilizer and industrial pollution dumping into its major rivers and gorges leads to birth defects in both animals and humans. This lamb is suffering from either polycephaly - having more than one head – or possibly diprosopus - having one head with two faces. Both are the result of monozygotic twin embryos failing to separate properly and neither are good for its long-term prognosis. 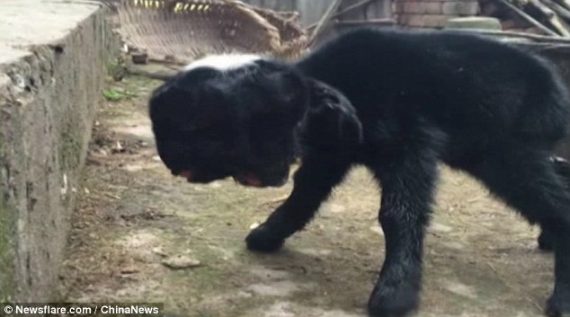 Two-headed animals are never a good sign. Two two-headed animals born so close in the same heavily industrialized and fertilized province should be a cause for concern. Will anyone heed the warning? Will anything be done?