If there is one thing which can be said about the UFO phenomenon - and said with a fair degree of certainty - it's that today we don't get the classic "flaps" and "waves" that dominated the field of Ufology decades ago. I'm talking about the likes of Washington, D.C. 1952, the surge of UFO activity in 1973, and the Belgian "Flying Triangle" encounters of 1989-1990. There was also a notable flood of reports in the United Kingdom in 1967 - which is the subject of this particular article.

Declassified files from the British Ministry of Defense reveal that from 1959 to 1966 the MoD received close to 450 reports of UFO activity in U.K. airspace - the vast majority of reports coming from the public, and a much smaller number originating with the police and the military. And 1966 led the pack with 95 reports. However, things changed dramatically in 1967 when the MoD was overrun by UFO reports. The actual figure was 362, which averages out to almost one per day. Although, it should be noted that many of those reports came from October 1967, the month when the nation briefly went UFO crazy. 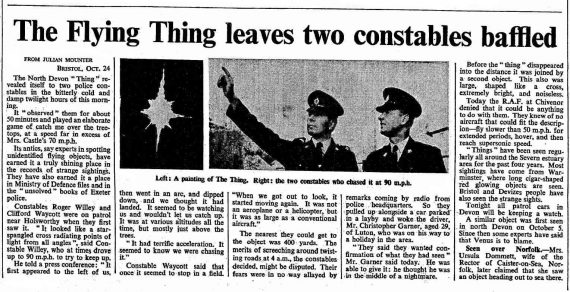 October 24 was the date upon which one of the most widely reported cases occurred. The witnesses were Roger Willey and Clifford Waycott, both police constables. It was shortly after 4:00 a.m., when the pair was approaching Brandis Corner, in the county of Devon, that something incredible appeared in the skies. 29-year-old Constable Wiley said of the object: "It looked like a star-spangled cross radiating points of light from all angles. It first appeared to the left of us, then went into an arc and dipped down and we thought it had landed."

PC Waycott provided the following words: "When we got out to look, it started moving again. It was not an airplane or a helicopter, but it was as large as a conventional aircraft."

And PC Willey wasn't finished: "It seemed to be watching us and wouldn't let us catch up. It was at various altitudes all the time, but mostly just above the trees. It had terrific acceleration. It seemed to know we were chasing it." Such was their determination to keep the UFO in view, Willey floored the accelerator, reaching speeds of around 90 mph.

What appears to have been the same "thing" was also seen by Stella Crocker of Brandis Corner. She caught sight of what she called a "starry cross" hovering at barely 400 feet, and at roughly the same time as Willey and Waycott. Moving across to the east coast of England, Ursula Dommett was witness to a huge "four-pointed cross" heading out to sea. The time was shortly after the experience of Stella Crocker. 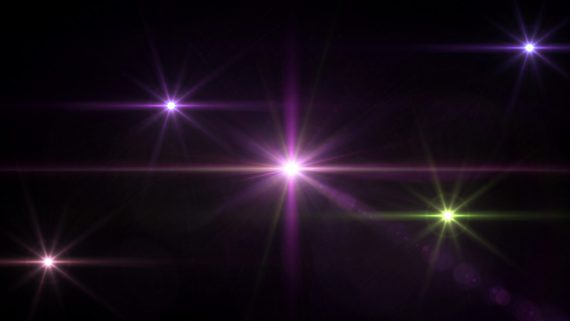 Then, on the night of October 25, retired Royal Air Force Wing-Commander Eric Cox saw what he termed "seven brilliant lights" as he drove along a stretch of Hampshire road. Cox was certain that "...they were three miles away at treetop height, flying in a V-formation. After about three minutes, they broke off and three went away. They just faded. Then the other four formed a perfect formation - just like a plus sign or a cross. They were certainly under some sort of control because the formation was so tight."

Across the following two days, reports surfaced from Somerset, Devon, Gloucester, Oxfordshire, and Derbyshire. Indeed, in Glossop, Derbyshire alone, no less than 6 police constables witnessed a UFO hanging in the sky in a "pendulum"-like fashion. For the next few days, the U.K. was gripped by UFO mania. Even the Ministry of Defense took a proactive stance. Records released under the terms of the U.S. Freedom of Information Act state that "On 12 December 1967, the British Embassy was directed by London to further investigate the subject with a view to cooperating with the Russians in observation teams for UFOs."

Late 1967 was, without doubt, quite a time when it came to the issue of UFOs in the U.K.