Women In Black – Soon In Print

Coming very soon from Lisa Hagan Books is a follow-up book to my 2015 release, Men in Black: Personal Stories and Eerie Adventures. The title of the new one: Women in Black: The Creepy Companions of the Mysterious M.I.B. It's a book which - like my 3 books on the MIB - demonstrates that the popular image of the WIB and the MIB being "secret agents" of some equally secret agency is very far from the reality of the situation. They're way stranger.

Certainly, in the world of on-screen entertainment the portrayal of the MIB and the WIB as employees of a top-secret, black-budget-style organization was presented most famously in the blockbuster 1997 movie, Men in Black, starring Will Smith and Tommy Lee Jones. The movie, of course, focuses primarily on the two main characters (Agents J & K). However, there's also the character of Laurel Weaver. She's a Deputy Medical Examiner, played by Linda Fiorentino. In the final minutes of the movie, she's recruited into that aforementioned black-budget agency and becomes Agent L, a definitive WIB.

But, the world of Hollywood is very different to the world in which we live. The WIB are clearly not the employees of the NSA, of the CIA, of the FBI, or of any other "ABC" agency you might care to mention. Indeed, there are very good reasons to suspect they are not even human. Just like the Men in Black, there is something more than a bit "off" about the WIB. They're pale-faced (as in deathly pale), emotionless, and they ooze negativity and menace.

Of course, and as you might expect, the Women in Black have significant ties to the UFO phenomenon, to alien abductions, and to Contactee-based cases. But, that's not all: the Women in Black take a deep interest in other aspects of the world of the paranormal, too. My book reveals the links between the WIB and the subject of ancient alchemy. The Women in Black are part of the Mothman saga - and of other "creature"-based mysteries, too. In a number of cases, those who find themselves in the presence of the WIB quickly fall sick - sometimes with serious illnesses, both physical and mental. Some of the people I interviewed for the book suggested they may even have been "cursed" by these fearsome and fearless females. 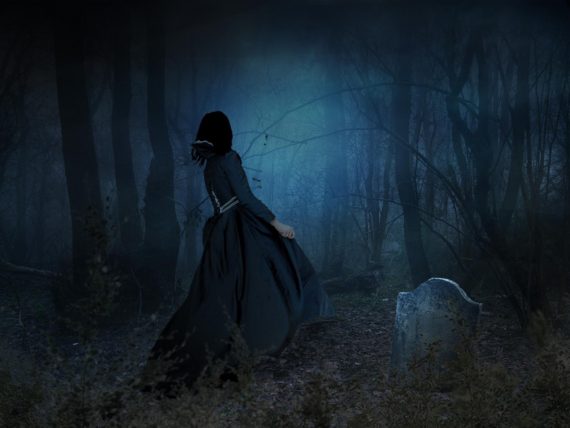 And, also like the MIB, the Women in Black have a long and disturbing history. It's a history that extends back to at least Victorian times. Tales of "mysterious women in black" proliferate in the newspapers of the 1800s. Elusive, eerie and intent on provoking havoc, mayhem, and fear, even back then they preyed on those that immersed themselves in the field of the supernatural - just as they do today. The word "demonic" is used on more than a few occasions by those who have had the bad luck to encounter these darkly-dressed - and often near-spectral - women.

Sometimes, they turn up at the homes of eyewitnesses to paranormal phenomena wearing large, wraparound sunglasses (which help to mask their bulging eyes, but not quite enough) and what are clearly black wigs - something which provokes three words in the minds of those who have had the misfortune to encounter them: alien-human hybrids. Witnesses are plunged into states of paranoia, fearful of the possibility that the Women in Black are not just watching them, but infiltrating our entire society, step by step. When cornered, they often respond with a snake-like hiss. Shape-shifting is a major part of the story. As is the intriguing fact that the Women in Black relish lurking in old libraries and bookstores. And, with that all said, avoid them at all costs.