World’s Largest Airship is About to Take Off 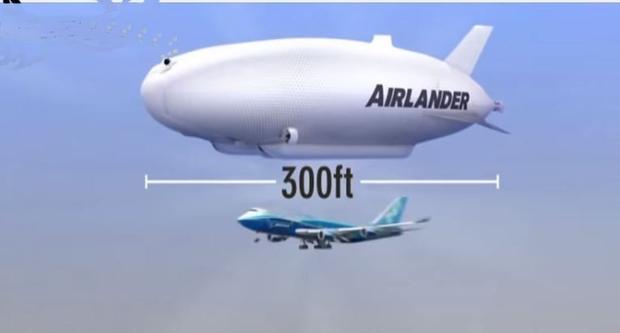 This airship is 65 feet longer than the world’s largest passenger airliner, the Airbus 380 Super Jumbo. It is 302-feet long and weighs 44,100 pounds.

The Airlander™ possesses a distinctive aerodynamic shape with a pressure stabilized, helium-filled hull constructed of durable Vectran material, a carbon fiber. It carries 38,000 cubic meters of non-flammable helium. The ballonets, compartmentalized air-filled bags in the hull can be inflated or deflated to change the craft’s altitude and is a safety feature. The hull provides 40% of the vehicle’s lift.

The craft can reach altitudes of up to 20,000 feet and can stay aloft for 5 days when manned and 2 weeks if unmanned. It is so buoyant it can cruise through the air at 91 miles-per-hour propelled by its four, 350 horsepower, independent V8 diesel engines. These engines also provide vertical thrust for horizontal lift-offs.

A series of parts are attached to the hull. A massive lower port fin aids in steering. There is a cockpit where the pilot controls the airship with airplane-like controls and special switches and gauges. A multi-use payload module is set below the hull, behind the cockpit and is where passengers and cargo would sit. It can carry up to 22,000 pounds of cargo.

It’s really quite a special machine to fly. The view from the flight deck is excellent with large windows and the airship characteristics, flying at a fairly lowish altitude.”

There is no need for an airport or any infrastructure in order to take off or land. A set of retractable pneumatic “skids” can be used for landing on land, sand, water or ice.

It can stay in the air for days and even weeks carrying a lot of weight on an ultra-stable platform. And it also has the versatility to land and take off from pretty much any surface, including water.

The Airlander™10 can be used on many diverse missions in the military and commercial sectors, like search and rescue, patrol, surveying, for passenger flight and luxury travel and for cargo delivery in remote regions. It is also quiet and uses little fuel.

It’s hard to imagine that the original concept was developed as part of a United States Army project that had been abandoned in 2012. The project has come a long way.

As the Airlander™10 resides in a giant hanger, moored a few meters off the ground, the next step is to complete ground tests and 200 hours of test flights some time this year. The manufacturer is optimistic, as the blueprints are ready for an Airlander™50, a larger version of the airship, capable of carrying five times the cargo.

This airship has a far more positive future than the ill-fated 1937 Hindenburg.