Back in the mid-1950s, a highly unusual and brief account of a cryptozoological nature surfaced. It came from one C.S. Lambert. The subject matter? The world's most famous man-beast. We're talking about Bigfoot, of course. In 1954, Lambert commented on his knowledge of very strange activity not too far from the Canadian city of Vancouver, British Columbia. It was activity which reportedly occurred almost two decades earlier, in 1935. While Lambert's account is brief, it contains a handful of intriguing nuggets of material that could still potentially be worth following up on - even decades after he told his story. Particularly so because it revolved around a band of violent and mysterious "giants."

Lambert wrote: "After a series of alarming reports that these giants were prowling around Harrison Mills, 50 miles East of Vancouver, disturbing the residents by their weird wolf-like howls at night, and destroying property, a band of vigilantes was organized to track the marauders down. However, no specimen of the primitive tribe was captured, and many white people became openly skeptical of the existence of the giants."

The term "primitive tribe" could be interpreted to mean a band of human giants. But, as we'll now see, Lambert then turned his attention towards "hairy giants" and Sasquatch. He continued: "According to Allen Roy Evans, in the Montreal Standard ('B.C.'s Hairy Giants'), the Indians are now very sensitive to any imputations cast upon their veracity in this matter. During the 19th century they were ready to tell enquirers all they knew about the Susquatch [sic] men; but today they have become more reserved, and talk only to Government agents about the matter. They maintain that the 'Wild Indians' are divided into two tribes, whose rivalry with each other keeps their number down and so prevents them becoming a serious menace to others."

And we also have this from Lambert: "Expeditions have been organized to track down the Susquatch [sic] men to their lair in the mountains; but the Indians employed to guide these expeditions invariably desert before they reach the danger zone. However, certain large caves have been discovered, with man-made walls of stone inside them, and specially-shaped stones fitted to their mouths, like doors. The difficulty in the way of penetrating to the heart of the Morris Mountains district is very great. The terrain is cut up by deep gorges and almost impassable ravines; it is easy to get lost, and hard to make substantial progress in any one direction for long." 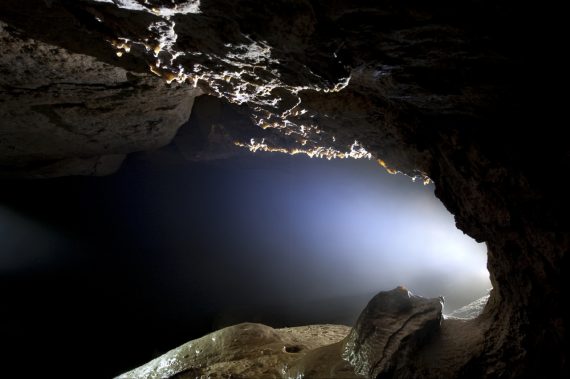 Although undeniably short in length - and lacking in specific, hard data - Lambert's account remains an interesting one. Let's take a closer look at his words. It would be very interesting to know who the so-called "Government agents" were that, according to Lambert, the Native Americans were sharing their stories with. Tales of official, secret interest in Bigfoot surface from time to time. Stan Gordon's 2010 book, Silent Invasion, documents a number of such cases. Maybe Lambert's words describe just such an example. Where, precisely, in the mountains, were those "certain large caves" that had "man-made walls of stone inside them?" And how about those "specially-shaped stones" which were "fitted" to the mouths of the caves "like doors?"

Whether as a desire to not reveal too much, or due to a lack of solid data, it's unfortunate that Lambert chose to tantalize his readers with mere fragments of what may very well have been a much bigger story of significant proportions. Perhaps, somewhere, Lambert's old files still exist. If so, they just might offer further insight into those mysterious "giants" and those large caves. Maybe, even evidence of the caves being created by - or, perhaps, modified by - Bigfoot creatures. The questions surrounding Lambert’s communication are many. The answers, however, are practically zero. Maybe someone out there, reading this, will take up the challenge and dig deeper into the thought-provoking account of C.S. Lambert. There may still be surprises to be uncovered.

Mind-Controlled Drones Are Coming to Airspace Near You