The current and former crop of U.S. presidential candidates seem to have accused each other of every unusual, secret or nefarious plan imaginable ... except this one. Little known candidate Zoltan Ivstan, nominee of the Transhumanist Party, has revealed personal knowledge of two wealthy individuals who plan to travel to Central America to find a doctor who will implant black market computer chips in their brains so they can communicate via telepathy. Is this true? Is this a great plot for movie?

The technology will allow them to carry out basic conversations. That's how far this telepathy idea has come.

Zoltan Istvan Gyurko is a science fiction novelist, futurist and writer on transhumanist topics. He announced his candidacy for president in 2015 and has campaigned in his coffin-shaped “Immortality Bus” but his run has not been taken seriously by most media outlets and Zoltan was never included in any early debates. 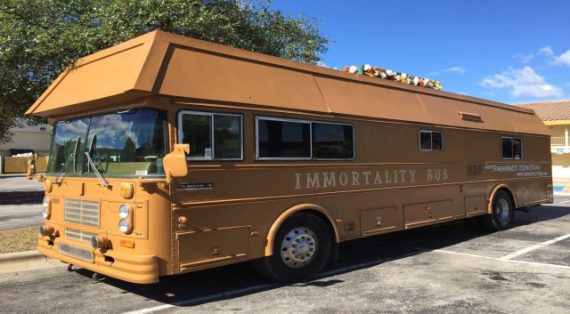 Zoltan claims these two wealthy men – alleged to be computer geniuses - are looking in the Honduras and in Eastern Europe for a doctor to implant black market AI chips in their brains that will work like an electroencephalogram (EEG) to read brain signals (easy), then return signals back to the brain in a similar and understandable fashion (not so easy) and communicate all of those thought signals with other chips in other brains. Yes, even Zoltan knows what this sounds like:

This is the beginning of the hive mind, where everyone is interconnected to one another.

Zoltan refuses to identify the first members of the hive out of fears they’ll be outed and/or stopped before they can be brain-hacked. Why?

The ability to commune with AI is almost like the Holy Grail for the community.

Zoltan is a believer in biotechnology (he has an RFID chip in his hand) and says his name is on the list for the brain implant (although he doesn’t want to be first). He predicts that this technology will be widespread in 5-10 years and the reason sounds like a presidential campaign platform:

The more connectivity we have, the more peaceful and prosperous our world will become.

Do we need brain implants to have more connectivity and a peaceful and prosperous world? Would you volunteer to be one of the first? Would Zoltan make a better president than the other candidates in the running? Would you go see the movie?

Astronomers Get Closer to Finding the Location of Planet 9