The picture is worth a thousand “Oms.” It shows a roomful of police officers in Canada seated peacefully in cross-legged positions meditating. In this age of controversy surrounding the stressful job of policing, especially in the U.S., is this a possible solution? Will they have to change their interrogation roles from good cop/bad cop to good karma/bad karma?

The photographs were taken at the West End Buddhist Temple and Meditation Centre in Mississauga, Ontario. Officers from the Peel Regional Police department were there to attend a lecture on mindfulness meditation and Buddhist philosophy presented by the temple’s deputy abbot, Venerable Dr. Bhante Saranapala, who likes to call himself the Urban Buddhist Monk.

No lecture in a Buddhist temple on mindfulness mediation would be complete without some minds-on experience, so the Urban Buddhist Monk helped them into lotus or cross-legged positions and led them in a meditation session. He thinks it helped.

They are doing a stressful job. I am delighted that I was able to share some insights by giving spiritual support to help them continue daily their service with a peaceful mind.

Being a true Urban Monk, Bhante Saranapala posted pictures of the event on Facebook. 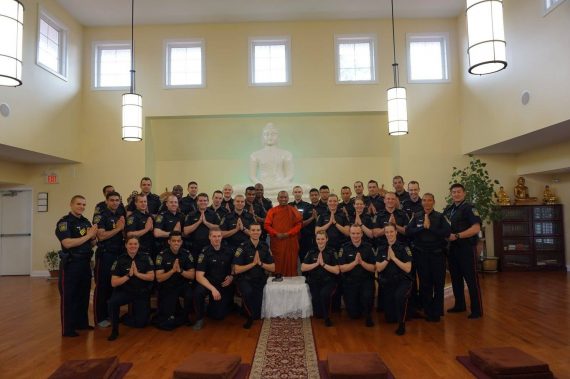 While the sight of police officers meditating is unusual, it’s not unique and not limited to Canada. Richard Davidson, a University of Wisconsin professor who focuses on mindfulness meditation, was approached last year by the police department in the city of Madison to set up meditation classes. Hillsboro, Oregon, police officer Lt. Richard Goerling turned to yoga and mediation in 2013 to successfully and peacefully improve his job performance and is now called upon by police departments nationwide for training and lectures on how it helps him and can help them.

I'm much more focused and engaged and skillful at dealing with what I'm addressing. I'm capable of listening more clearly and hearing what's happening.

Teaching police officers about the stress-reducing benefits of meditation seems like a good thing to do. There will be criticism that this type of training in the U.S. is a government-sponsored mix of religion (Buddhist) and state. A better discussion might address how, if it’s truly beneficial, meditation can be secularized and taught at an early age to all to help prevent crime, rather than just a stress-reliever to those in the endless battle against rising violence.

The Sun May Have Eaten an Early Giant Planet