The state of New York is big, slightly bigger than the country of Nicaragua, with a population of 19.8 million – 8.55 million of that in New York City alone (Nicaragua’s population is 6.08 million). With a Gross Domestic Product nearly the same as Mexico, New York is vital to the economy of the United States. The first Europeans to walk New York soil were French and Dutch colonists. The French eventually migrated northward and settled in Quebec. When the British annexed the region from the Dutch, they named the new British colony New York, after the Duke of York. Bordered by Canada, five states, and the Atlantic Ocean, New York has more than 18.9 million acres of forestland, and 7,600 freshwater lakes. Famous residents include basketball great (and “Space Jam” star) Michael Jordan, 2016 presidential candidates Donald Trump and Bernie Sanders, actors Robert Downy Jr., Tom Cruise, Sylvester Stallone (actually, more actors than I can count), and musicians the Ramones, Tupac Shakur, the Beastie Boys, the Velvet Underground, and KISS. Although New York is home to lots and lots of water monsters, let’s start with wild men, and a giant. 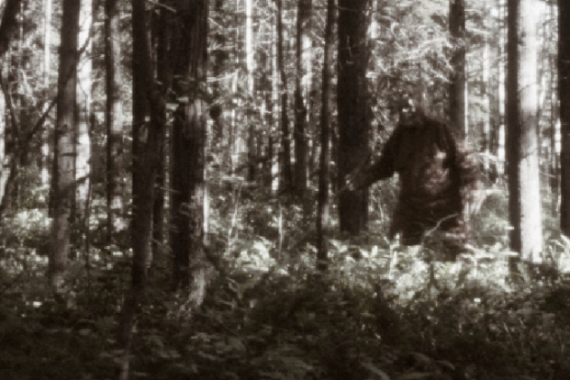 Large, hairy, manlike creatures have been reported by settlers of New York since 1818. According to Voices: The Journal of New York Folklore, the first reported encounter with a Wild Man was outside the town of Ellisburg near the Canadian border. A “gentleman of unquestionable veracity” saw a hairy, stooped man running through the woods. The townsfolk turned out to hunt for the Wild Man, but he remained elusive.

Other reports were sporadic. A young hunter told his father he had a run in with a hairy boy in August 1838 near the border town of Silver Lake, Pennsylvania. Told to shoot anything that wasn’t a person or domesticated animal, he was on alert when he heard someone coming toward him in the woods. Readying himself, he saw a six- or seven-year-old boy covered in black hair. The boy stopped about thirty feet from him, and stared at him. Terrified, the young hunter shot at the boy, but his hands were shaking so hard he missed the creature that turned and fled into the trees.

In 1869, a group of nearly 100 people saw a Wild Man in Steuben County. The hairy monster screamed as it ran “with a springing, jerking hitch in his gait [which] gave him more the appearance of a wild animal than a human being,” according to The Plattsburgh Sentinel. One witness told The Evening Gazette the Wild Man had, “long, matted hair; the thick, black, uncombed beard; the wild, glaring, bloodshot eyeballs, which seemed bursting from their sockets; the swage, haggard, unearthly countenance; the wild, beastly appearance of this thing, whether man or animal, has haunted me.”

A horseman saw a Wild Man in July 1895 near Margaretville, New York. A “wild-eyed man or ape” with “long and hairy arms” stood in the road ahead, according to Voices. The monster – at least seven feet tall – screamed, and grabbed one of the man’s horses, dragging it into the darkness at the side of the road. A farmer shot at an ape-like creature, but the beast threw him to the ground and ran off.

Hundred of such sightings sprinkle the annals of the state’s history. Throughout the 1970s and 1980s, the Kinderhook area has had enough sightings of this Bigfoot-like monster it’s been called the “Kinderhook Creature.” 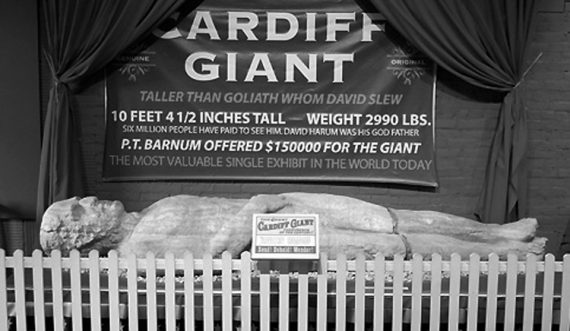 On 16 October 1869, well diggers near Cardiff, New York, uncovered a 10’ 4.5” petrified man. The stone man was then, of course, put on display for 25 cents a peek. The giant quickly became such a popular attraction for farmer William Newell, he hiked the price to 50 cents.

However, there was something odd about the giant. Archaeologists and geologists called the giant a fraud, although the religious community supported the idea of a giant because of giants in the “Bible.” None of this mattered to people in the area, who still lined up to see the giant. Circus showman P.T. Barnum offered $50,000 for the giant, and when his offer was turned down, he had his own giant made.

In an 1870 court case, New York tobacconist George Hull admitted creating the giant and planting it to be discovered by the well diggers. The giant, that has been featured in everything from a Mark Twain short story to a 2012 indie rock album, is on displayed in the Farmers’ Museum in Cooperstown, New York.

In July 2012, photographer Denise Ginley and her boyfriend took a walk along the East River toward a farmer’s market, when they discovered a rotting monster. "We were horrified by it and we took some camera phone pictures and then finally we decided to come back with my camera and I got up the courage to climb over the fence and get closer to it," Ginley told the New York Daily News.

Although the New York Parks Department clamed the creature was a “discarded cooked pig,” the long, straight tail, and clawed feet make this impossible.

"The Parks Department was probably very quick to identify it as a pig and dispose of it, but it is most certainly not a pig,” Ginley told the Daily News. “The most obvious sign being the lack of a cloven hoof, instead this creature has five digits all close together."

But what is it? Dr. Paul Curtis, a Cornell University professor, told the Daily News it could be a dog, but because of its lack of hair, and decayed state, it was hard to tell.

This sighting is the second such creature in New York. In 2008, a bloated, unidentifiable carcass washed ashore at Montauk, an area of the state steeped in UFO, and time travel lore.

Champlain is a 490-square-mile, 400-foot-deep freshwater lake that lies mostly in New York, but also touches Canada, and Vermont. It is home to America’s most famous lake monster – Champ. The local American Indians, the Abenaki the Iroquois, had stories of the monster Tatoskok, a horned serpent that lived under the lake. The first European to see the monster is disputed, although the popular story is that Samuel de Champlain saw something big in the water. But Champlain’s sighting was of something less than ten feet long. That’s a snack for the next major sighting.

In July 1819, Captain Crum of the ship Bulwagga Bay, saw a black monster that stretched 187 feet long, according to the Plattsburgh Republican. The monster had a head like a sea horse, which stuck about 15 feet from the water. It had eyes the color of a peeled onion, three teeth, and a white star on its forehead.

A railroad crew saw gigantic serpent with silvery scales in the lake in 1873. A county sheriff saw a thirty-foot-long “water serpent” in the lake that July, and in August, a steamship collided with a water monster and almost overturned.

Sightings of Champ continue to this day. The most famous photograph of the beast was taken in 1977, and shows a creature resembling the Loch Ness Monster. 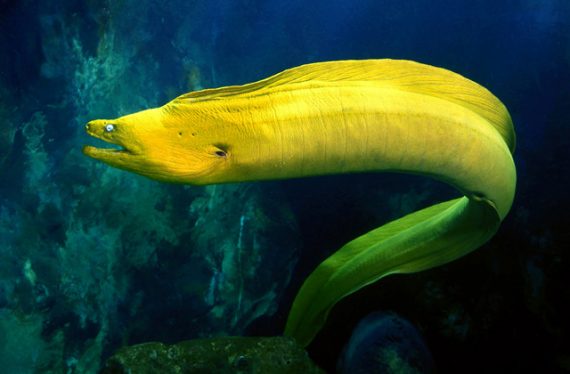 Cayuga Lake, one of upstate New York’s glacial finger lakes, has a surface area of 66.41 square miles, is 435 feet deep, and is home to two water monsters. Reports of the monsters date back to the early 1800s, but the first newspaper account didn’t appear until 1897 in The Ithaca Journal, simply stating locals as being afraid to get too close to the water. In 1929, vacationers reported seeing two creatures about fifteen feet long frolicking in the lake.

Encounters began to get ugly in the 1970s when a toothy eel attacked swimmer Steven Griffen, biting his arm, and breaking it. Sightings of Old Greeny are sporadic at best, but continue. Locals think the monster is most probably a sturgeon. 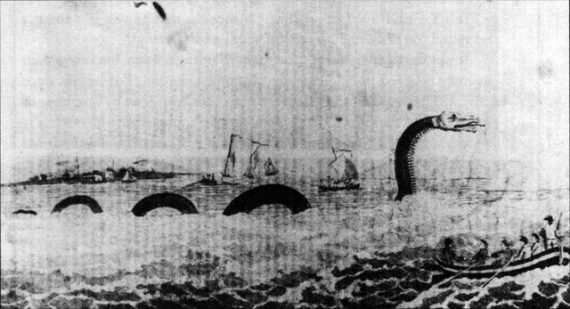 Another of the finger lakes, 38-mile long, 617-feet-deep Seneca Lake is also the swimming ground of a monster. Local American Indian tribes claimed the lake to be bottomless, and inhabited by a temperamental creature. European settlers dismissed these stories as fanciful until 1899. According to a 1900 article in the Seneca Daily News, steamboat Captain Carleton C. Herendeen and his pilot Frederick Rose saw an overturned boat about twenty-five feet long. However, as they closed in on the boat, it turned and swam away. Witnesses aboard the boat saw the monster raise its head and show two rows “of sharp, white teeth.” The boat struck the monster, the impact tossed passengers to the deck.

Sightings continue, although none as exciting as Captain Herendeen’s.

Witness reports of a water monster that inhabits the Hudson River between Manhattan and Poughkeepsie vary wildly. Some witnesses say they saw a shark, others a manatee, and still others a sea serpent, according to a 1989 article in The New York Times. Most sightings of Kipsy are only humps in the river, but people insist they saw something large, and unknown in the river.

Up next: North Carolina.

The Most Amazing Animal Discoveries (That Were Made at Food Markets) 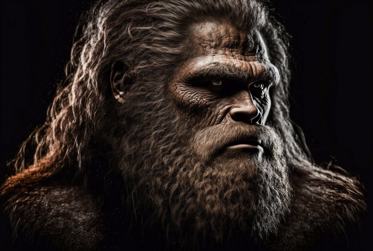