UFO-and-alien-themed movies have been making sizable dents at the worldwide box-office for decades. As I define it, the UFO subgenre boasts some of the most successful movies of all time. But for every Independence Day, there are dozens of lesser-known UFO movies. Some have slipped under our radar for being, shall we say, less 'polished' than the typical Hollywood fare; some have been simply too 'weird' and failed to connect with audiences of their time; while others have escaped our attention for being produced outside of the Hollywood system altogether. 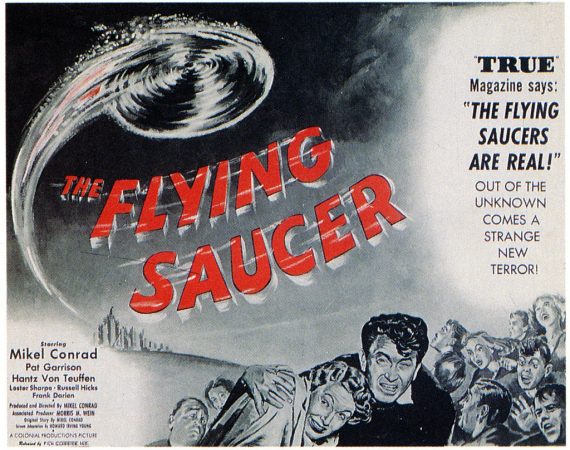 The Flying Saucer was the world’s very first UFO movie, and its director, Mikel Conrad, had claimed publicly while in production that he had managed to secure footage of a real flying saucer that would wow audiences the world over. In September 1949, Conrad told the Ohio Journal Herald, “I have scenes of the saucer landing, taking off, flying and doing tricks.” Shortly thereafter the director became the subject of a two-month Air Force investigation.

As documented by Nick Redfern, files released under the Freedom of Information Act reveal that an agent of the Air Force Office of Special Investigations was dispatched not only to interrogate Conrad about his claims, but also to attend the first private screening of his completed film. Unsurprisingly, Conrad’s story was soon revealed as an elaborate marketing scam designed to promote what was, in reality, a tedious and uneventful movie. The Conrad case is significant for its demonstration of the high degree of seriousness with which the USAF regarded the issue of media depictions of the burgeoning UFO phenomenon.

Disappointingly, the eponymous flying saucer eventually proves to be a soviet secret weapon. Aliens don’t even get a mention. At the time of the movie’s release in 1950, the Extraterrestrial Hypothesis (ETH) was already firmly in favor among UFO believers, and Conrad’s unimaginative story failed to connect with audiences. Its shoddy production values and dreadful performances didn’t help. Like many a real flying saucer, Conrad’s movie was seen by only a few people, and for a short time.

When a unit of British military paratroopers vanishes inexplicably during a jump from an army plane, two investigators, Patrick Allen (Bob Megan) and Neil Connery (Jim Radford), are tasked with solving the mystery and soon uncover a dastardly alien plot to steal human bodies by snatching them out of the air.

Released in 1969, this James-Bond-inspired, low budget Brit flick was arguably the first motion picture ever to focus directly on the idea of alien abduction. This was a time when abduction lore was still embryonic, with only a small handful of accounts having surfaced in UFO literature, most notably the Hill abduction case of 1961 (not widely publicised until 1966), and the Herbert Schirmer case of 1967. While earlier movies, such as Invaders from Mars (1953) and This Island Earth (1955), had contained plot details closely paralleling those of modern UFO abduction accounts, The Body Stealers was the first to devote its entire narrative to the mystery of alien-human kidnappings. Sadly, it’s incredibly dull, dramatically and UFOlogically, although it still entertains today in an Austin Powers sort of way.

This peculiar production was broadcast in 1974 as an ABC Movie of the Week. The Stranger Within starred Barbra Eden as a suburban housewife with a vasectomized husband who finds herself inexplicably pregnant. As the narrative unfolds the wife’s behavior grows increasingly bizarre. Her husband and her doctor eventually reach the radical conclusion that she has been abducted and impregnated by aliens, and that her memory of these events has been erased. The film plays out as a serious psychological drama, free of the cheap sensationalism it could so easily have embraced.

The author Mike Clelland has provideed insightful analysis of the movie, noting: “What is terribly bizarre is that this movie seems to have predicted so much of what has now become well documented within the UFO abduction research field – accounts of women who are mysteriously pregnant, seemingly after an abduction by aliens.”

Clelland further observes a list of plot points in this obscure little movie which anticipate with eerie precision what are now considered to be key characteristics of the abduction phenomenon:

~ A pregnancy without any sexual source.

~ A female abductee with gynecological problems

~ The urge to research and study scientific topics.

~ Hypnosis as a tool for recovering memories of the abduction experience.

~ An abductee channeling an alien being.

~ A sense of longing for an alien world.

~ Marks on the body that can’t be explained, only to heal rapidly without scarring.

~ An abductee with Rh blood factor.

The Stranger Within was scripted by famed writer Richard Matheson, based closely on his own 1953 short story, Trespass. “How did Matheson write something that so closely predicted what would unfold decades later?” Clelland asks. “One thought is that he might have been an abductee, and he was simply using his own experiences, either remembered or buried, when he wrote the story.” Clelland dismisses this idea, though, “because he [Matheson] had a massive output of work, and little else [of his] seems to match these ideas.”

Clelland instead suggests that a far stranger force could be at work in this case. He writes:

I am convinced that there is a very real power in the creative process, and when abandoning (or disciplining) oneself to this kind of artistic inspiration, something mysterious can unfold. The artist can somehow tap into deeper truths. The work-a-day routine of sitting in front of a typewriter (or canvas, or drawing board) can be seen as a ritual act, very much like the forgotten alchemist who sits before his candle. Matheson must have been on fire during those early years writing for pulp magazines, and something weirdly predictive seems to have been manifested in his tight little story.

The power of the creative process to anticipate and manifest realities has been explored extensively by Jeffrey J. Kripal, J. Newton Rayzor Chair in Philosophy and Religious Thought at Rice University in Texas. In his book, Mutants and Mystics, Kripal asserts that "There is something fundamentally mystical about writing... words, stories, and symbols can become real.” Kripal means this literally, not figuratively. It is through the creative process, he says, that “The imagination can become empowered to make contact with what appears to be a real spiritual world or, at the very least, an entirely different order of mind." 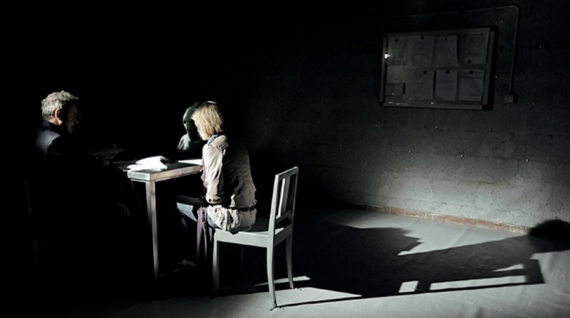 Gaia (Francesca Cuttica), a Chinese-to-Italian interpreter in Rome is summoned for an urgent and highly sensitive assignment. So sensitive that she’s kept in the dark, both figuratively and literally, by her government employer, represented by belligerent Secret Service agent, Inspector Curti (Ennio Fantastichini).

Unable to resist a substantial cash offer for her services, Gaia reluctantly accepts her clandestine assignment, which requires that she be blindfolded for her own security. Ushered into a darkened room in an underground government bunker, Gaia is asked to sit (still blindfolded) at a table opposite the subject of her translation – a mysterious “Mr. Wang.”

Inspector Curti then prompts Gaia to elicit from Mr. Wang the reason for his unexpected arrival in Rome. As Curti’s interrogation methods become increasingly hostile, Gaia demands that her blindfold be removed and the lights turned up, only to find that the quietly-spoken ‘Chinese man’ in front of her is, in fact, an alien. And a slimly, tentacled one at that. He’s shackled to a cold metal seat in a stark room under the watchful eye of an armed guard.

Gaia is horrified – first by Mr. Wang’s distinctly alien visage, then, more so, at the shameful manner in which this unique and timid visitor is being treated by her government. Mr. Wang is adamant that he comes in peace on a mission of “cultural exchange,” and it’s not long before the liberal Gaia begins admonishing Curti for his total disregard for human rights, pleading for the parched captive to have a sip of water and to be freed from his shackles. But Curti won’t budge, insisting that Mr. Wang, despite his gentle and courteous manner, is a grave threat to national security.

Things go from bad to worse for the poor Mr. Wang as he endures not only psychological but also physical torture in a prolonged effort to divulge his true agenda on Earth. At one point, Gaia even sneaks off to phone Amnesty International to inform them of the crimes unfolding beneath the Roman streets, and we want desperately for her call to be answered.

It may have been written as an allegory of Earthly foreign politics, but The Arrival of Wang raises interesting UFOlogical questions: Would aliens have human rights? Should they? What would it take for non-human extraterrestrials (or any extraterrestrials, for that matter) to gain our trust? Are all potential alien races deceptive and invasive, as Hollywood so often assumes?

Intelligently scripted and powerfully acted, The Arrival of Wang has a brilliant premise, and one that directors the Manetti brothers (Antonio and Marco) deliver on until a most unwelcome last-minute twist, which, rather than daring to subvert our inherent fear of ‘the Other’, cynically plays to it, imparting to the viewer a message that’s just plain abhorrent. Shame. A Hollywood remake is rumored to be in the works.

“In 1966, the Australian and US Governments established Pine Gap, a top secret research facility in the remote Australian outback. 15 hours ago all contact with the facility was lost.” Thus reads the opening blurb for Crawlspace, a low-budget Australian sci-fi horror set at the infamous Pine Gap base, which, in real-life, is a joint US-Australian defence space research installation operated by the US National Security Agency in conjunction with the CIA. It is, by all accounts, one of the most secretive government facilities on Earth. It is also alleged by some to be a testing ground for captured alien technologies.

Crawlspace fully embraces the Pine Gap folklore, pitting an elite black-ops assassination unit against the terrors that lurk 200 feet beneath the surface of what is referred to in the movie as “Australia’s own Area 51.” The black-ops unit has been sent in to kill a number of highly psychic and extremely dangerous human “test subjects” who have escaped from their cells and wrought havoc on the facility.

That’s right, Pine Gap in this movie is concerned less with satellite tracking and communications-monitoring than it is with horrific biomechanical research involving inter-species grafting procedures that stitch-together human and alien brains to create the ultimate psychic warrior in a decades-long East-vs.-West remote viewing war. “What we do here isn’t exactly sanctioned by the government,” says a Doctor Mengele-like scientist. No kidding.

Crawlspace begins with bags of potential, but, within minutes, dumps these bags in one of its many cramped ventilation shafts, where they remain just beyond the reach of all involved in this clumsy and clichéd production.

With its wise-cracking, heavy-heat-packing elite military unit, and its extensive use of night-vision POV shots, Crawlspace wants desperately to be James Cameron’s Aliens. But while Cameron’s movie is an adrenalin shot to the heart, Crawlspace is more like a dose of Valium. Still, for the committed UFO buff, there’s much here to wrap your brain around. It’s worth a watch.