A man who some people call the ‘Bosnian Indiana Jones’ claims he found the world’s oldest man-made sphere, which looks suspiciously like the boulder that rolled behind Doctor Jones in Raiders of the Lost Ark. This is the same 'Bosnian Indiana Jones' who claims to have discovered the world’s largest pyramids, also in Bosnia. Is he for real or a member of the Bosnian Tourism Bureau?

Archaeologist Semir Osmanagić (also known as Sam Osmanagich) was born in Bosnia, left during the Bosnian war (he lives in Austin, Texas), and returns to his homeland regularly for unusual archaeology projects. One such project occurred in 2005 when Osmanagić claimed that what most experts thought were natural hills in central Bosnia and Herzegovina are actually man-made pyramids. Their size would make them the largest pyramids on Earth. While Osmanagić claims to have excavated tunnels, stone blocks and ancient mortar, other scientists and skeptics believe the hills are flatirons - steeply sloping triangular landforms created by erosion into the shape of a pyramid or a giant household flatiron. 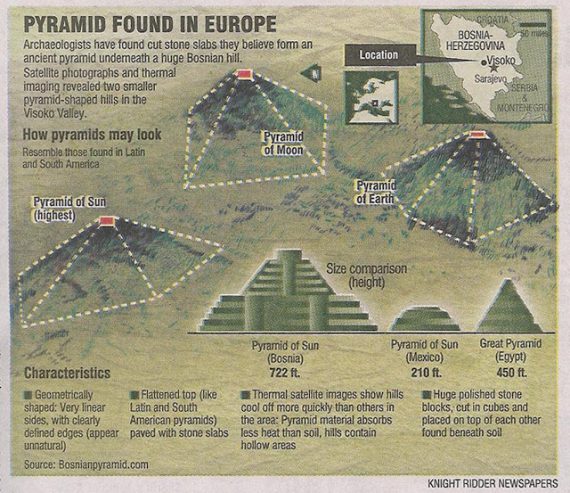 Needless to say, his latest discovery is also controversial. Osmanagić found the stone sphere near Zavidovici in central Bosnia and Herzegovina. Its diameter is between 2.4 and 3 meters (8-10 feet) – a size that, if it’s man-made, would make it the largest and heaviest such man-made stone sphere in the world. There are eight other giant round stones near this one in the forest at Podubravlje, and Osmanagić agrees with others who believe the landscape was once covered with them before they were destroyed by people looking for rumored gold based on local folklore.

Giant man-made stone spheres, 300 in all weighing up to 15 tons, have also been found in Costa Rica, where it’s believed the extinct Diquis people carved, sanded and polished the so-called Diquis Spheres by hand 1,500 years ago. Osmanagić claims the Bosnian stones are older and bigger than the Costa Rican ones and appear to have a high iron content. If they’re man-made, he believes their discovery will change the course of European history by proving the existence of a lost civilization with advanced technology. Whoa.

On the other geological hand, they could be concretion - stones formed round naturally by mineral cement in sedimentary rock (like the Koutu boulders in New Zealand) - or stones rounded by spheroidal weathering, a chemical process that erodes jointed bedrock into stone spheres.

One thing Osmanagić has going for him is the backing of the government of Bosnia and Herzegovina, which wants to show the world it’s open to sharing new discoveries and ideas. Take that, Washington!

The hills look like pyramids. The giant boulders look round enough to be man-made. Semir Osmanagić in a hat looks a little like Indiana Jones. Do these add up to history-making archaeological discoveries in Bosnia? Osmanagić is still looking for more and we’re still looking for proof.

Astronomers are Watching a Young Earth Being Formed