It’s scary to experience a massive 7.3 earthquake. It’s worse when you live in a country where you know it could be just a harbinger of a bigger one, like the 8.9 earthquake that hit in 2011. It’s terrifying when you survive, only to walk outside and see the landscape covered by a mysterious foam. A sign of the end of the world? A new unexpected consequence of grinding of tectonic plates? Something else? Something worse?

As of this writing, at least 41 people have been killed and at least 1,500 injured by the 7.3 magnitude which shook Fukuoka and much of the southern Japan island of Kyushu at 1:25 am local time on April 16th, just two days after another quake of 6.4 magnitude hit the same area. Rescue workers were treating injuries, searching for missing persons in the rubble, assessing damages … and dealing with the mysterious foam. An unexplained carpet of strange, thick foam filled streets in the center of the southern Japanese city of Fukuoka, 90 km (56 miles) from the epicenter of the earthquake, in the early hours of Saturday morning – shortly after tremors from a devastating earthquake of magnitude 7.3 shook the town.

I saw it just after the earthquake.

Witness Kazuki Nabeta said the foam, which she encountered in the central district of Tenjin, was “disgusting.” Photos of the mysterious dense foamy substance posted on social media showed it covering many blocks of the city, sometimes reaching many feet high. 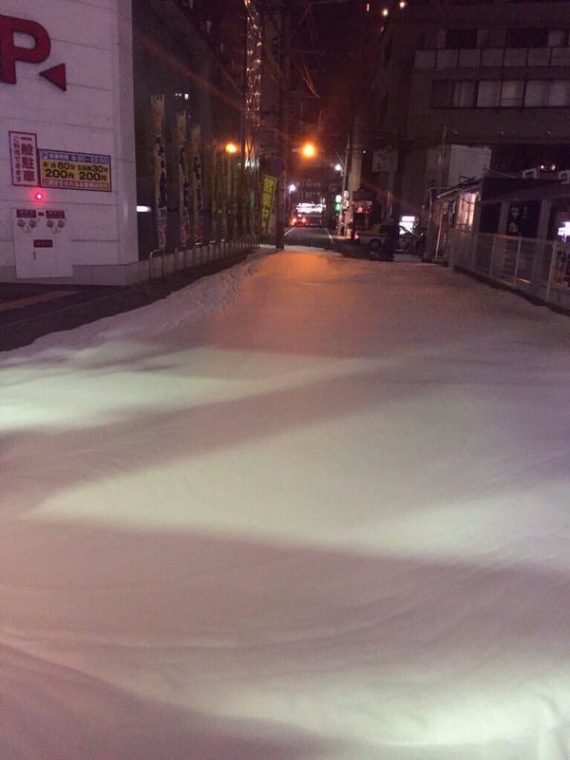 Many residents needing to go out or even evacuate were afraid to touch the foam without some sort of explanation. The first rumor was fire-fighting foam, but no firefighting equipment nor any fires were in the foam-filled neighborhoods. Another possibility given was that it came from a leak in a broken utility pipe, although sources of the foam, like cracks or holes in the ground, were not found. What kind of utility pipe carries foam? Even worse, what kind of utility pipe carries a substance that mysteriously foams after coming in contact with air? Foam is often caused by toxic chemicals, as was the case last year in Bangalore, India, when toxic chemical foam caught fire on a lake and covered and contaminated a river. 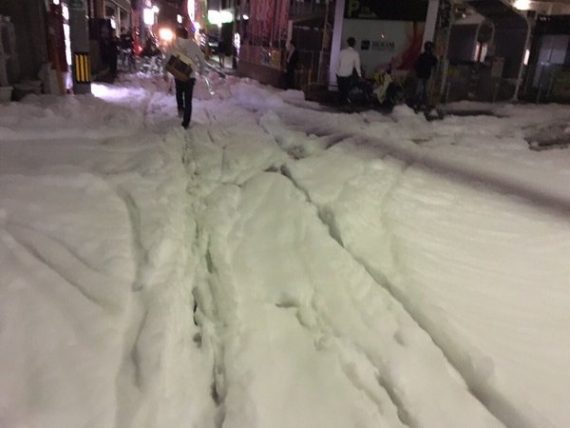 As of now, there is still no confirmed explanation for the mysterious foam covering parts of Fukuoka, Japan, after the massive earthquake. Will residents ever be told the real cause? Would you go walking in it without an explanation?