Ravens Are Just as Smart as Chimps

Avian admirers rejoice: 'bird brain' is no longer a scientifically valid insult–at least where ravens are concerned. A study by scientists at Lund University in Sweden has found that corvid birds are as clever as chimpanzees when challenged to perform rational problem solving tasks, proving that brain size is indeed not everything.

So how exactly does one measure intelligence when it comes to birds? For this particular study, scientists looked at the ability of ravens (and other birds) to override "animal" motor impulses and instead act rationally and efficiently. To do this, they replicated the well-established Cylinder Test.

In the Cylinder Test, a piece of food is placed within a transparent tube that has openings at either side. If the animal is following natural, non-rational impulses, it will head straight for the food, whacking its nose/beak/mouth onto the tube. If the animal is thinking rationally, it'll head for one of the open sides of the tube and extract its tasty morsel.

In 2014, scientists at Duke University conducted a large-scale study of 36 different animal species, mainly primates and apes, using the Cylinder Test to measure inhibitory control. What Lund University did was then conduct the same tests but with a number of different birds. 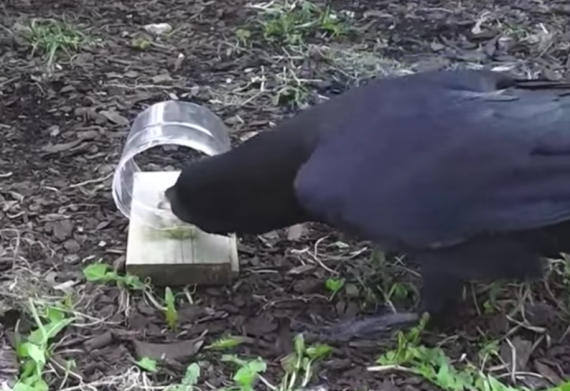 In 100 percent of cases, ravens exhibited inhibitory control and intelligently, successfully extracted food from the tube–jackdaws and New Caledonian crows had about a 97 percent success rate. And by this measure, ravens are are clever as chimps and bonobos. So what does this mean?

According to Can Kabadayi, a doctoral student in Cognitive Science who conducted the study:

And that leaves a lot more to explore. Kabadayi continues:

It has implications about how evolution really works, about how cognition evolves. How is it possible that two brains that are so different to each other can converge on a higher level when it comes to such tests?... There is still so much we need to understand and learn about the relationship between intelligence and brain size, as well as the structure of a bird's brain.