‘The huge number of sea monster sightings now on record can’t all be explained away as mistakes, sightings of known animals or hoaxes." These were the words of Darren Naish Ph.D., a paleontologist with the University of Portsmouth, who spoke with the Daily Mail in 2011. He concludes that at least a handful of the best observations and sightings collected over time, "some of them made by trained naturalists and such, probably are descriptions of encounters with real, unknown animals."

In fact, many credible marine biologists and paleontologists over the years have supposed that there may be a good likelihood that if large creatures are yet to be discovered anyplace on Earth, the oceans may be the likeliest habitat for them to have remained hidden. Reports of the creatures have appeared in a variety of locales, which include waters near the Cape of Good Hope (see the HMS Daedalus incident), as well Brazil's coastal waterways, famous for an observation by two British naturalists aboard the vessel Valhalla in 1905.

A number of reports of similar creatures have also occurred off the North American shores as well. One such description of a mystery animal was shared with me recently by a couple, who had been visiting Wiggins Pass near Naples, Florida, with their daughter. The primary observer had been only a few feet from the shoreline, while her husband and young son were enjoying recreation time in the water nearby.

The woman explained that she and her husband, as well as others on the beach nearby, "saw a huge creature swimming 20 feet from my husband that no one on the beach could identify."

The rest of her story was as follows:

“To me and my husband, it appeared like a huge black twisted log... then realizing that it was moving we cleared the area and screamed for my son to leave as well.  The thing was swimming toward where he was in water. It was black, shiny, about 2 feet in diameter, and 7-8 feet long.  We did not see its mouth or its tail, just the middle. It was not a fish, more like a huge snake. No fins. We had grouped with others on the beach who saw the creature later appear; only a small portion of its back - no hair, no fins - just a pure black round snake like thing.  Someone mentioned it may have been a pilot whale, but no fins were seen by any of us. That was so strange.”

The account given bears some similarity to this incident, which involved a couple on a commercial guided fishing boat near Sanibel Island, Florida. The woman who filmed the incident, identified as "Patty", said that even the fisherman guide that accompanied them was unable to identify the creature, which they likened to resembling "a giant anaconda" which appeared to be attacking a manatee. The film was uploaded to YouTube in 2013.

A number of years ago, an episode of the History Channel program Monster Quest also discussed an unidentified animal seen in Florida's coastal waterways, with the episode in question displaying footage of the alleged creature (it can be viewed online here).

Perhaps the strangest incident involving a purported sea serpent encounter off the Florida coast appeared in the May 1962 issue of FATE, in which the author, Edward Brian McCleary, gave an admittedly fantastic account of the deaths of his three friends during a “sea monster” attack, off the coast of Pensacola, Florida. McCleary's story allegedly took place on March 24, 1962; some have interpreted the story as being a manifestation of survivor's guilt stemming from an actual incident, in which McCleary's guilt manifested as a sea serpent fantasy.

Although the final incident we'll examine did not take place off the coast of Florida, the photos and description do appear to match the descriptions of a large, dark-colored, snakelike animal, as described in the Florida incidents (as well as with other sea serpent reports from around the world). The incident in question, involving what is known as the "Hook Island Sea Serpent", took place near Stonehaven Bay, Hook Island, off the shore of Queensland in December, 1964. Several photos documented the appearance of a large, tadpole-like creature, the most famous of which appears below: 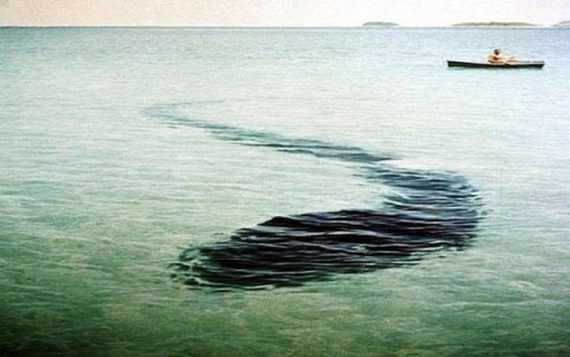 I've included the Hook Island Serpent affair here due to the case's relative popularity in the history of cryptozoology; however, it must be known that at the time this incident occurred, many leading researchers (including Bernard Huevelmans, the "father" of cryptozoology) had believed this to be a hoax, and noted that the man behind the story, one Robert Le Serrac, had described to associates of his that he had, "another thing in reserve which will bring in a lot of money… it’s to do with the sea-serpent." Additionally, Le Serrac had been wanted by INTERPOL at the time of the Hook Island incident.

What can we make of such stories, and is there any truth to the stories of "mystery monsters" that bear an undeniable resemblance to the sea serpents of myth and legend? Are all such stories hoaxes, or pure misidentifications? Or could there indeed be a mystery species yet to be discovered, and one which resembles a large, snake-like water monster in our oceans?

If you believe you have observed such a creature, or have filmed or photographed something similar, I would be eager to hear from those in the readership willing to share your stories. Please email me here, and thank you in advance for sharing details about what you may have seen.