Recently, I was present in-studio for a roundtable podcast discussion on the subject of cryptozoology, featuring a number of researchers with varying perspectives on the phenomena in question. Among them had been fellow Mysterious Universe writer Nick Redfern, who supports the possibility that some cryptozoological stories may have unconventional or “paranormal” explanations, as well as researcher Lyle Blackburn, who takes a more “flesh and blood” approach with his studies.

To speak of Redfern’s paranormal approach to the crypto mysteries, occasionally we do find reports that fall under the Bigfoot category that, to put it simply, present a lot of unruly problems. While these reports, which some may assign to the so-called realm of “high strangeness”, are in the seldom minority, they are often overlooked by the greater cryptozoology community for a number of reasons… some of them very good ones.

Generally, the study of creatures like “Bigfoot” approaches this mystery from the perspective that these entities, whatever they may really be, are likely to be some form of biological entity that closely resembles humankind. That is, the most likely avenue, and thus the most widely accepted approach to their study, seems to be the flesh-and-blood angle. However, when peering a bit deeper into the mystery, these creatures are purported to boast a number of curious elements that beg further consideration… and may similarly warrant different modes of thought applied to understanding their overall meaning.

There are a small minority of stories that not only involve the appearance of creatures like Bigfoot, but also what some interpret to be metaphysical abilities some have ascribed to them, in terms of being able to simply “vanish” into thin air.

I was told a story along these lines myself a number of years ago, while visiting a Bigfoot conference in Newcomerstown, Ohio, which was shared with me by one of the presenters that year. I recall this fellow as being a researcher who altogether seemed fairly “nuts and bolts” in his approach, and yet, after the talk he gave, told me in strictest confidence about seeing “Chewbacca” on a dark country road in rural Pennsylvania back during the mid 1990s.

The incident occurred right around dusk, and as he watched the animal strolling along the roadway between two corn fields at around dusk, illuminated in the headlights of his vehicle, the thing very suddenly vanished, leaving no trace of the creature he had observed. For rather obvious reasons, the presenter in question had felt it might be in good taste to omit this aspect of the story from his presentation, and similarly asked me not to share his name along with the story in future retellings.

Indeed, while there may be a plethora of reports out there that seem to involve odd-goings-on like this, ranging from the kinds of disappearances described above, to absurd recollections of Bigfoot creatures seen wearing clothing, and even Sasquatch encounters that occur in conjunction with flying saucer sightings. Admittedly, these things seem so outrageous, especially within the cultural context we have ascribed to the Bigfoot beast (that of a relic hominid, or similar species that has evolved parallel to our own) that we simply cannot accept them.

But asking one of those really difficult questions, perhaps we must consider something else that is troubling about the mystery surrounding Bigfoot. While these “animals” (if taken as being real at all) appear to be quite physical, and consisting of flesh and blood like you or I, one must admit to their uncanny elusiveness. That is, even if a small population of the creatures were all that existed worldwide, shouldn’t we have just a bit more hard evidence supporting their existence? 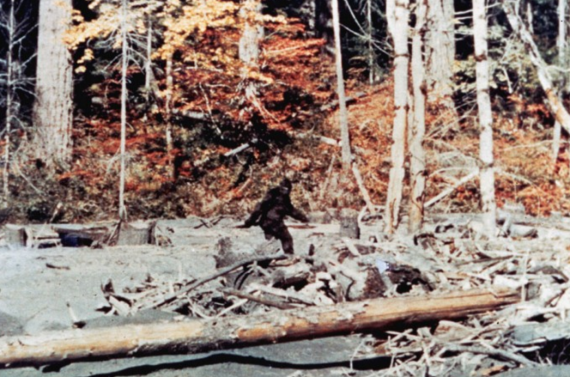 Some would argue that such reliable physical evidence does exist, and that the real problem involves the various avenues that are not being reached in terms of bringing such compelling evidence to the forefront of the scientific mainstream. Examples of this would include not just the multitudes of eyewitness reports collected over the years, but also the evidence in footprint castings, hair samples, audio recordings, and photos or video — however blurry and vague they appear to be. However, despite all the collected “evidence” of this sort, the apparent lack of what we might call a “smoking gun” has dissuaded many from investing further involvement in the entire mess… though it could again point to the notion that there may be more to the elusiveness these creatures possess such a mastery of.

To suspend our disbelief for a moment and give open-minded consideration to the problems surrounding Sasquatch, one working premise I’ve considered has to do with the possibility that Bigfoot creatures, while indeed physical, flesh-and-blood creatures, may actually represent some aspect of humanity.

This sounds very strange, and perhaps difficult or even impossible to accept. However, if this were the case — that Bigfoot were far more human than they are generally taken to be — we might agree that while they obviously aren’t “human” like you or I, they could still represent some aspect of our evolutionary heritage that is strange enough to seem exotic, and yet close enough that there would be no need to account for their existence with notions of relic hominids, half-human monsters, or para-physical beasts of another dimension. Alternatively, maybe the more credible reports of Bigfoot involve such things as actual feral humans, as well as honest misidentifications, and occasionally the ill-intended hoax just as well… all of these could conceivably summarize Bigfoot as a human endeavor, though a multi-faceted one. However, these scenarios do not appear to account for all the elements presented in eyewitness reports, ranging from the size and behavior of the creatures, to their more beastly physical characteristics that set them apart from anything so simple as a "wild person".

It might be unfair to completely discount the “high strangeness” cases of Bigfoot, or for that matter, other proposed cryptozoological entities that are reported from time to time. However, we might also argue that among the problems associated with understanding such phenomenon are the differences between interpretations that draw from fact, and what at least conform to the general requisites of consensus reality, versus those which draw from the seemingly imaginary.

At the end of the day, there may yet prove to be some factual basis underlying reports of creatures like Bigfoot… however, by that time, it may be revealed that they weren’t quite what we once thought they had been.

Spring Heeled Jack and the Monkey Man: Parallels Between Panics?