The Time Traveler Running For President of the United States

Just when you thought the U.S. presidential campaign couldn’t get any more strange … a time traveler has announced his candidacy and bases his platform on seeing Abraham Lincoln deliver the Gettysburg Address as well has his knowledge of what’s going to happen in 2054. Top that, Donald Trump!

The man is Andrew Basiago, a lawyer who claims his time traveling occurred in the 1970s when he was a young boy and participated in “Project Pegasus,” an alleged secret U.S. government program under DARPA (Defense Advanced Research Projects Agency)

They trained children along with adults so they could test the mental and physical effects of time travel on kids.

Basiago claims DARPA used a teleporter developed by Nikola Tesla to send him back a million years, to Lincoln’s time more than once, to the future and to Mars with a young man named Barack Obama. Is that enough information to get your vote?

Every presidential candidate needs to make campaign promises and Basiago’s website has 100 promises he will keep if elected. These include things like open the government files on secret time travel technologies, put Bigfoot on the endangered species list (he’s seen Sasquatch twice), end the coverup of ET visits to Earth, reveal the secret U.S. base on Mars and ban chemtrails. To sound like a more conventional candidate, he also promises a moratorium on immigration, an end to Obamacare (replaced by a single-payer system like Canada) and an end to homelessness and hunger. 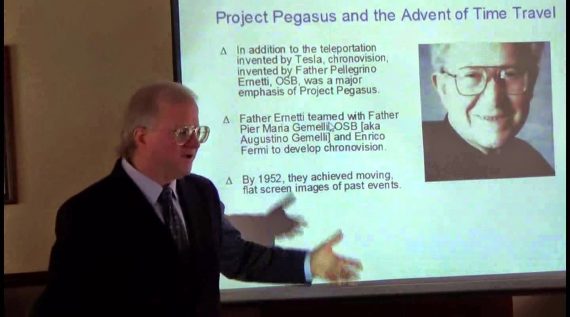 Basiago has no super PACs or billionaire backers, just Project Pegasus, which he is now the leader of, and his Facebook page. Don’t bother checking the polls because he doesn’t register anywhere. And yes, he knows he sounds crazy. When did that stop anyone from running for president?

I just recognize that the truth ultimately prevails. I recognize that some people view me as a liar, or as crazy, or they’re envious that they were not involved. But I’m simply sharing what happened to me. I’ll get a certain amount of disbelievers, but I’ll also get a certain number of believers.

If he’s been to the future, wouldn’t he already know if he’ll win? Perhaps he does and winning is not the main objective of this whistleblower’s campaign. After all, Hillary Clinton is also promising full disclosure of secret government UFO files. Maybe he’s running for vice president.

Sparks Really Do Fly in an Unexpected Place During Sex