The Woman Who Is Allergic To Herself

If you’re a boss or a teacher, you probably think you’ve heard every excuse in the book for calling in sick or not doing homework, but unless you live in Florida, you most likely haven’t heard this one. A woman in Clearwater was diagnosed with an extremely rare condition that makes her allergic to herself. Before you call your manager with this one, you may want to find out more about it. 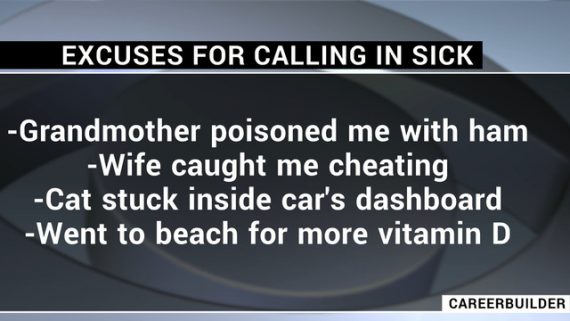 Julie Reid went to her doctor over two years ago suffering from hives all over her body. After extensive tests, the diagnosis came back Cholinergic Urticaria – a rare hypersensitive skin condition where the breakout of hives is triggered by her own touch because she’s allergic to her own sweat and tears.

It itches like crazy, I scratch my skin open.

Julie says the hives can last anywhere from an hour to several days and, while she’s covered in them, she can’t work at her job as a gymnastics and dance instructor – not exactly a non-sweating occupation. The condition also forces her to stay indoors because her skin is sensitive to sunlight and the heat doesn’t help.

This doesn’t sound like a fun call-in-sick excuse anymore, does it?

Before you write it off as your next fake illness, consider the fact that you may already have it. According to the National Organization for Rare Disorders (NORD), 20 percent of people, both males and females, have urticaria – the mild form of this immune system disorder that often falls under the general description of “heat rash.” While that type of rash goes away quickly, 5 percent of these people may have Cholinergic urticaria, which can last from days to weeks to months.

There is no cure for Cholinergic urticaria, but many cases eventually go away on their own – albeit after many periods of agonizing itching and hives. For the most serious cases, doctors recommend carrying an emergency epinephrine injection for treatment of anaphylactic shock.

That’s what Julie Reid has, along with the depression the condition has caused her. With no health insurance or disability, she has set up a web site to raise funds, tell her story and give other sufferers a place to share and exchange information.

If you have a rash that won’t go away, see a doctor. If you want a day off from work, fake the flu.

Zebrafish May Help Humans to One Day Regrow Limbs