This Hoverboard Is Awesome – If It’s Real

The video brings chills to anyone who has ever dreamed of flying on a board like Marty McFly or Silver Surfer and has those who can’t afford to get on Elon Musk’s waiting list reaching for their wallets in hopes they can be first in line for once in their lives for something really cool. That something is the Flyboard Air hoverboard from Zapata Racing. 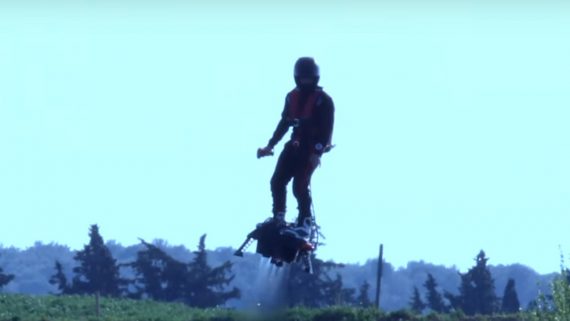 Zapata Racing? That’s the company responsible for thrills at the beach with its other Flyboard – a water-powered board and jetpack that attaches to a jet ski (now called a personal watercraft or PWC) and allows the rider to fly up to 23 meters (75 feet) above the water (the length of the hose) or dive and ride underwater. That Flyboard has been around since 2011 and it works.

What about the Flyboard Air? The latest creation from the inventive (insane?) mind of jet ski racer Franky Zapata is a completely different animal. According to the video and limited other information available, the Flyboard Air is a self-propelled hoverboard steered by a joystick that’s capable of reaching a hieight of 10,000 feet (3,000 meters) with a top speed of 93.2 mph (150 km/hr) and can fly for 10 minutes before refueling. Whoa!

Yes, that’s Franky Zapata riding the Flyboard Air in the video, and no, it doesn’t appear he reached anywhere near the height or speed limits advertised. Zapata sticks to his familiar terrain (over water) and flies at what looks like about 100 feet (30 meters) and a conservative speed of 35 mph (56 kph).

That’s about it for the details. Experts speculate that the Flyboard Air has a turbine engine and the fuel tank was in Zapata’s backpack. Skeptics say they can see wires or suspect it’s computer graphics. There were apparently no other witnesses to the flight, especially no witnesses from the Guinness World Records committee, which was present last May when Catalin Alexandru Duru’s Omni Hoverboard – a propeller-driven battery-powered board – set the world record for longest distance traveled by a hoverboard, flying 905 feet at a height of 16 feet for 90 seconds. Then there’s the Arcaboard – also battery-powered and limited to hovering a safe few inches above the ground.

Is the Flyboard Air for real? That remains to be seen. Zapata Racing is a proven provider of a working hoverboard – albeit water-powered – but it says the Flyboard Air won’t be available this year. FAA regulations? Hidden dangers? Wires broke?

Marty McFly and the Silver Surfer are safe … for now.