An Affidavit of the Bigfoot Kind

August 26, 1957, marked the date upon which one of the strangest and most controversial official documents of all time was prepared and signed. The man that made the sworn statement was one William Roe, of Edmonton, Alberta, Canada. The affidavit was made so strange and controversial due to the fact that it detailed Roe's very own encounter – and an extremely close encounter – with a large, female Bigfoot. Roe began: "Ever since I was a small boy back in the forests of Michigan, I have studied the lives and habits of wild animals. Later when I supported my family in northern Alberta by hunting and trapping, I spent many hours just observing the wild things. They fascinated me. The most incredible experience I ever had with a wild creature occurred near a little place called Tete Jaune Cache, B.C., about 80 miles west of Jasper, Alberta. I had been working on the highway near this place, Tete Jaune Cache, for about 2 years."

In October 1955, said Roe, he "decided to climb five miles up Mica Mountain to an old deserted mine, just for something to do. I came in sight of the mine about 3 o'clock in the afternoon after an easy climb. I had just come out of a patch of low brush into a clearing, when I saw what I thought was a grizzly bear in the brush on the other side. I had shot a grizzly near that spot the year before." It soon became apparent that the creature in his midst was no bear: "This one was only about 75 yards away, but I didn’t want to shoot it, for I had no way of getting it out. So I sat down on a small rock and watched, with my rifle in my hand. I could just see part of the animal’s head and the top of one shoulder. A moment later it raised up and stepped out into the opening. Then I saw it wasn’t a bear."

Indeed, that much is clearly evident from the detailed description that Roe provided: "This to the best of my recollection is what the creature looked like and how it acted as it came across the clearing directly towards me. My first impression was of a huge man about 6 feet tall, almost 3 feet wide, and probably weighing near 300 pounds. It was covered from head to foot with dark brown, silver-tipped hair." 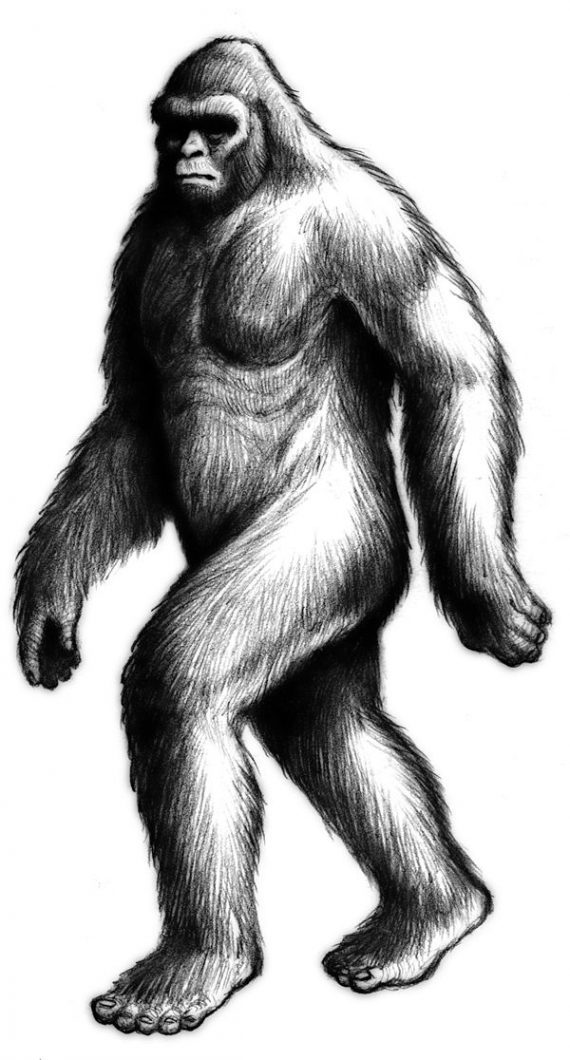 Not only was the creature not a bear, it wasn’t male, either, as Roe quickly realized: "As it came closer I saw by its breasts that it was female. And yet, its torso was not curved like a female's. Its broad frame was straight from shoulder to hip. Its arms were much thicker than a man’s arms and longer, reaching almost to its knees. Its feet were broader proportionately than a man’s, about 5 inches wide in the front and tapering to much thinner heels. When it walked it placed the heel of its foot down first, and I could see the grey-brown skin or hide on the soles of its feet."

As Roe revealed next, he had the opportunity to view the animal at almost perilously close quarters: "It came to the edge of the bush I was hiding in, within 20 feet of me, and squatted down on its haunches. Reaching out its hands it pulled the branches of bushes towards it and stripped the leaves with its teeth. Its lips curled flexibly around the leaves as it ate. I was close enough to see that its teeth were white and even. The head was higher at the back than at the front. The nose was broad and flat. The lips and chin protruded farther than its nose. But the hair that covered it, leaving bare only the parts of its face around the mouth, nose and ears, made it resemble an animal as much as a human. None of this hair, even on the back of its head, was longer than an inch, and that on its face much shorter. Its ears were shaped like a human's ears. But its eyes were small and black like a bear’s. And its neck also was unhuman, thicker and shorter than any man's I have ever seen."

It's hardly surprising that, as he watched the creature, Roe tried – in vain, it transpires – to rationalize the encounter in wholly down to earth fashion: "As I watched this creature I wondered if some movie company was making a film in this place and that what I saw was an actor made up to look partly human, partly animal. But as I observed it more I decided it would be impossible to fake such a specimen. Anyway, I learned later there was no such company near that area. Nor, in fact, did anyone live up Mica Mountain, according to the people who lived in Tete Jaune Cache."

Then came the moment that, very possibly, Roe was hoping would not come to pass. The creature suddenly realized it was being watched: "Finally, the wild thing must have got my scent, for it looked directly at me through an opening in the brush. A look of amazement crossed its face. It looked so comical at that moment I had to grin. Still in a crouched position, it backed up three or four short steps, then straightened up to its full height and started to walk rapidly back the way it had come. For a moment it watched me over its shoulder as it went, not exactly afraid, but as though it wanted no contact with anything strange." 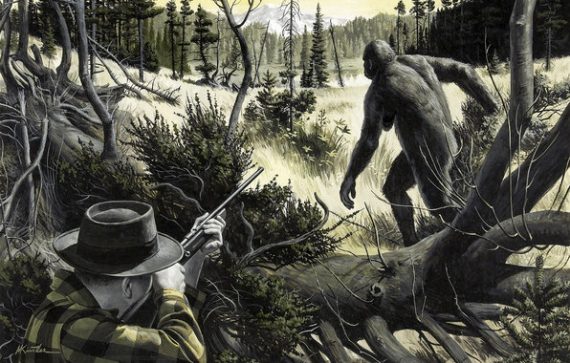 Although the idea of shooting and killing the creature crossed Roe's mind, he quickly backed off from doing so, and explained why: "The thought came to me that if I shot it I would possibly have a specimen of great interest to scientists the world over. I had heard stories about the Sasquatch, the giant hairy 'Indians' that live in the legend of the Indians of British Columbia and also, many claim are still, in fact, alive today. Maybe this was a Sasquatch, I told myself. I leveled my rifle. The creature was still walking rapidly away, again turning its head to look in my direction. I lowered the rifle. Although I have called the creature ‘it,’ I felt now that it was a human being, and I knew I would never forgive myself if I killed it."

In mere moments, the encounter would be over. Roe outlined those final seconds: "Just as it came to the other patch of brush it threw its head back and made a peculiar noise that seemed to be half laugh and half language, and which I could only describe as a kind of a whinny. Then it walked from the small brush into a stand of lodge-pole pines. I stepped out into the opening and looked across a small ridge just beyond the pine to see if I could see it again. It came out on the ridge a couple of hundred yards away from me, tipped its head back again, and again emitted the only sound I had heard it make, but what this half laugh, half language was meant to convey I do not know. It disappeared then, and I never saw it again."

The animal was gone, but Roe was certainly far from finished with it, as he explained in his affidavit: "I wanted to find out if it lived on vegetation entirely or ate meat as well, so I went down and looked for signs. I found it in five different places, and although I examined it thoroughly, could find no hair or shells or bugs or insects. So I believe it was strictly a vegetarian. I found one place where it had slept for a couple of nights under a tree. Now, the nights were cool up the mountain, at this time of year especially, and yet it had not used a fire. I found no signs that it possessed even the simplest of tools. Nor did I find any signs that it had a single companion while in this place."

Roe concluded: "Whether this creature was a Sasquatch I do not know. It will always remain a mystery to me unless another one is found. I hereby declare the above statement to be in every part true, to the best of my powers of observation and recollection."

Kid Finds Long Lost Mayan City And Then He Loses It