Boiling Water May Be Bubbling Away the Surface of Mars

If there are (or were) living beings on Mars, they may have left something boiling and it’s the likely cause of those mysterious streaks on the planet’s surface. That’s the theory (except for the part about Martians leaving a pot boiling) of some researchers who recreated the scenario on Earth in a chamber that simulated the atmospheric pressure on Mars.

The atmospheric pressure is the key, according to a new article in Nature Geoscience written by Marion Masse of the University of Nantes in France, who led an international team trying to determine the cause of dark salty streaks on Martian slopes and crater walls. These recurring slope lineae can be up to 1,000 feet long and 15 feet wide and look like they were formed by flowing water, even growing during the warm season and shrinking like they were evaporating during the colder season.

However, the average temperature on Mars is minus 67 degrees Fahrenheit, so how can these streaks be formed by running water? Not only that, how could the flow be strong enough to dig into the surface and move dust and dirt downstream? Atmospheric pressure (I didn’t forget about it), or specifically the lack of it, can cause water to boil at temperatures far below 212 degrees Fahrenheit. The atmospheric pressure on Mars is 0.6% of Earth's mean sea level pressure. Does this mean its water is boiling even thought its Martians are freezing?

Masse and his team used a “Martian Chamber” to recreate the surface of Mars. They built a 30-degree slope of Martian-like gravel, placed a block of ice on it, closed the door, lowered the atmospheric pressure to a Martian level and waited.

As they watched, the ice quickly melted and its water began boiling … hard. The quick, hard boiling caused the gravel and sand to get kicked up and tossed around, forming piles on the slope that soon turned into landslides that created … you guessed it … river-like streaks.  They ran the test again with an Earth atmosphere and nothing happened other than a little melting. 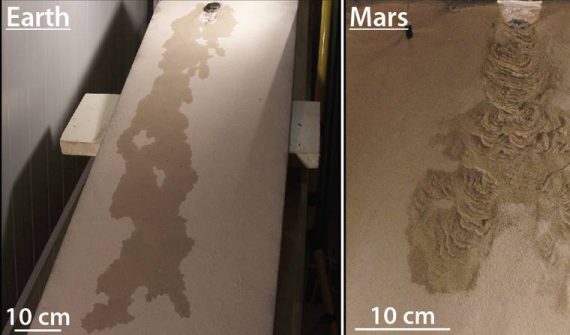 Since we already know there’s some kind of water somewhere on Mars, what does this experiment prove? It could be that the water on Mars may not be liquid and there may not be much of it. It took only a little ice to boil and move the dirt in the “Martian Chamber” and it evaporated quickly. That could mean there’s not much, if any, on the surface to support life forms.

On the positive side, it means Martians can’t be blamed for leaving a pot boiling.