Let’s say you left your phone on the viewing platform at the top of a 33-story skyscraper. Let’s say the platform is closed for the day and the security guard refuses to take bribes. Let’s say you just happen to have purchased a pair of vacuum cleaners with fully-charged batteries. Problem solved? If you’re professional extreme rock climber Sierra Blair-Coyle, it definitely is.

Sierra Blair-Coyle didn’t exactly lose her phone. The event was a promotion for the LG Code Zero K94SGN vacuum cleaners. The building is located in Songdo, Incheon, South Korea, and the 33 stories adds up to 460 feet. Her goal was to climb the outside of the building using nothing but the vacuum-powered suction cups, her shoes and her formidable climbing ability. The suction cups were not standard equipment (although they might come in handing for cleaning ceiling fans) but the vacuums, with 200 watts of power and 45,000 rpm inverter motors, were. 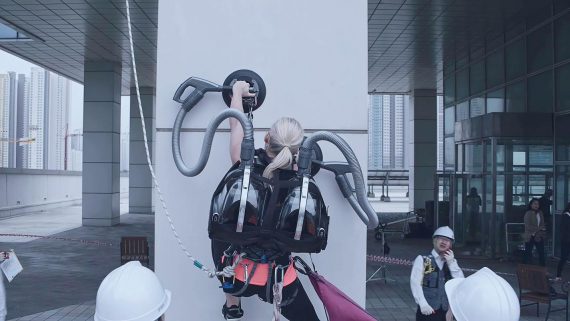 The motors were strapped to Blair-Coyle’s back, bringing her total weight to 70 kg (154 pounds). From bottom to top, she completed the exterior climb in only 30 minutes, with one stop to swap out some dead 80V lithium-ion batteries. That’s pretty impressive, for both the climber and the vacuum cleaners. According to LG, the inverter motors are smaller, lighter and more efficient than conventional vacuum motors. The PowerPack 80V lithium-ion battery provides up to 40 minutes of power in regular (non-climbing) mode.

Of course, any stunt like this needs a “kids-don’t-try-this-at-home” warning. The suction cups were specially made for climbing and Blair-Coyle was tethered to a safety rope ... not to mention she's an extreme rock climbing world champion. Then again, that’s far less than Tom Cruise needed (helicopter and winch) for his stunt climb up the outside of the Burj Khalifa hotel in Dubai in Mission Impossible: Ghost Protocol.

The reports don’t say what Sierra Blair-Coyle received for completely the climb. She certainly qualified for at least a lifetime supply of free vacuum cleaners. With that kind of talent, she probably got a number of marriage proposals too.

Giant Sea Sponges and Monster Squids Are Getting Bigger