Giant Sea Sponges and Monster Squids Are Getting Bigger

Just in time for the summer swimming season, new reports emerge on the discovery of the world’s largest sea sponge and evidence that suggests giant squids are bigger – much bigger – than previously thought. Is there still time to change your beach trip to a mountain hike?

The world record giant sponge measured 3.5 meters (11.5 feet) in length and about 2 meters (6.6 feet) in width and was discovered at a depth of 7,000 feet by the crew of the NOAAS Okeanos Explorer at Hawaii’s Papahānaumokuākea Marine National Monument, the largest contiguous fully-protected conservation area under U.S. jurisdiction. While hard to spell, the monument is easy to remember because it’s also home to the world’s largest coral.

For a sponge to achieve that size, it has to be old and estimates put the age of this record-breaker at over 2,300 years old. Divers retrieved a specimen of what they believe to be the same species and determined it’s a member of the Rossellidae family. Fortunately for swimmers, this is is not one of the carnivorous sponge species (Cladorhizidae).

That’s not the case with the giant squid. The legendary sea monsters are rarely seen alive (only recently have they been videotaped) so measurements are difficult, but researchers studying beached or caught specimens estimate they can reach up to 13 meters (42 feet) length.

Except for Charles Paxton, a fisheries ecologist and statistician at the University of St Andrews. According to his new study, these marine monsters can reach 20 meters (64 feet) in length. What does Paxton know that other squid researchers don’t? Beaks.

Beaks? Paxton collected or analyzed the beaks of as many giant squids (Architeuthis dux) as he could find. Beaks are hard to digest so they’re often found in the bellies of sperm whales after dining on colossal calamari. Paxton then did a statistical comparison of beak sizes to squid lengths and determined that previous estimates were low … lower than squid droppings.

I am extrapolating here, and extrapolation can sometimes be a bit sketchy. But I think these are fairly safe extrapolations. I genuinely think that giant-squid size has been underestimated. It'd be interesting to find out if they do ever reach a size where they cannot ever be eaten.

At 64 feet, about the length of a school bus, giant squids are big enough to eat small whales and big swimmers … a school bus full of big swimmers. Fortunately, they tend to stay in the deep sea and are extremely reclusive – only about 130 specimens have been discovered so far.

Bus-sized giant squids. Mini-van sized giant sponges. Who needs summer blockbusters when you can get your swimming trucks scared off you just by looking through your snorkeling mask? 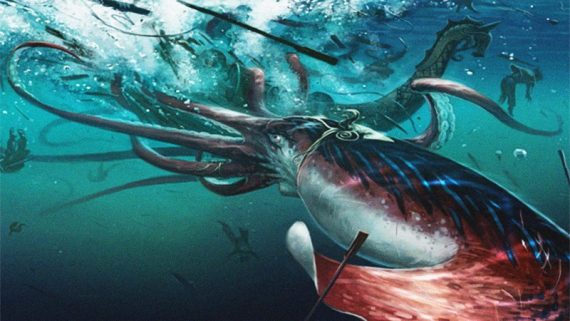