GoatMan Writes a Tell-All Book About Life as a GoatMan

What is it like to be a GoatMan? Some people in Louisville, Kentucky, attempted to find out recently about a Goatman known as the Pope Lick Monster and one of them ended up dead. It’s too bad they didn’t wait a few weeks until another GoatMan wrote a tell-all book about life on all fours amongst the billies, nannies and kids.

GoatMan: How I Took a Holiday from Being Human is the story of how British freelance graphic designer Thomas Thwaites came up with the idea of becoming a half-man-half-goat, created an exoskeleton that allowed him to do it without radical (and probably illegal) surgery and attempted to cross the Alps with a herd that adopted (or at least tolerated) him. 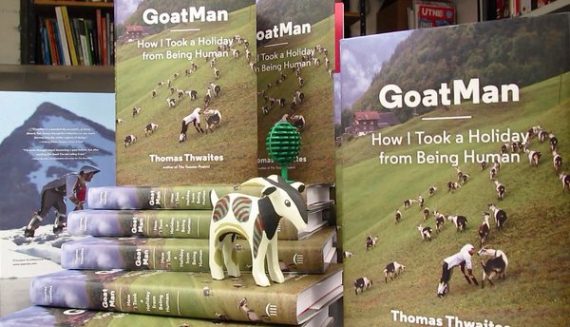 Thwaites’ original plan was to traverse the Alps Hannibal-style as an elephant but the exoskeleton would have been as massive as the depression he knew he’d experience after finding out that elephants feel pain and sadness. A shaman told him he was spiritually closer to a goat (he doesn’t say how the shaman determined this) and a goat is what he became.

Well, a GoatMan. Thwaites went to Buttercups Sanctuary for Goats in Boughton Monchelsea, England, where a different kind of shaman – goat behavior and rehabilitation expert Dr. Alan McElligott – taught him how to think like a goat. Other experts helped him build a goat exoskeleton with prosthetics that turned his arms into legs which supported 60 percent of his all-fours walking weight (same as a goat). With a helmet and a chest-protector in case any goats tried to get amorous (yes, he probably had other areas protected too), Thwaites headed for the Alps.

A goat farm in Switzerland played along with Thwaites, letting him attempt to walk downhill (very painful), run (finished last), walk uphill (finished first) and graze (much easier) with the goats. Eating a pot of heated grass he’d been chewing on tasted about as good as it sounds.

(Spoiler alert - skip to the next paragraph if you don’t want to know how it ends). For Thwaites, life as a goat end baa-adly (you knew it was coming eventually). After eating a cannibalistic pot of goat stew served by the farm owner, he realized he’s better cut out to be a human.

However, Twaites calls his life as a GoatMan a “special kind of time.” And by special, he means he got a book contract that paid for his prosthetics and injuries sustained while stumbling around in a GoatMan suit, not to mention a few therapy sessions.

The goats got a great idea for a reality show: Survivor: Kids vs. You’ve Got to be Kidding.

And the shaman got a good laugh.