It is perhaps one of the most famous among modern conspiracies: the notion that aircraft flying above us have been introducing chemical agents into the atmosphere, for purpose of secret immunizations of the population, mood alteration and behavioral experiments, or other insidious purposes. Thus, the idea of "chemtrails" in our skies has persisted for a number of years, amidst further rumors of secret elements of control from behind the scenes in the world of officialdom.

In particular, the idea of chemtrails has been getting a lot of attention in the press lately, due in part to a rash of interest in those among proponents of the idea; namely action stars Chuck Norris and Vin Diesel, as well as the late songwriters and performers Prince and Merle Haggard, both of whom we lost in recent weeks.

"Does anyone think it’s possible that such mass vaccinations or immunizations have occurred by air in trial locations in the U.S.? How many plane-dropping chemical cocktails have already been sprayed around the world in the name of securing public health?" These were among the questions asked by Chuck Norris, action star of films like the Missing in Action series, in an op ed he wrote for the World Net Daily website titled, "Sky Criminals." Fundamental to Norris' argument had been phraseology featured in a March 2003 science paper called, "Feasibility of aerosol vaccination in humans."

Norris quotes from the abstract of the paper, which reads in part as follows:

"Several thousand human subjects have been aerosol-vaccinated over a period of many years in Russia with live-attenuated strains against many diseases. Extensive field trials in South America with aerosolized live-attenuated measles vaccine have also been successful, and excellent results have been reported with pilot projects employing inactivated or live-attenuated aerosol influenza A vaccine. We conclude that aerosol immunization seems a promising method of vaccination. Although some basic information is still lacking, this method has already been used successfully in large populations and has therefore passed the phase of initial feasibility evaluation."

At a glance, the literature cited above does seem to tie in well with the ongoing allegations about chemicals released into the atmosphere. However, nowhere in the abstract Norris cites does it make specific reference to such "aerosolized" immunizations being deployed from high altitudes by aircraft: quite the contrary, it specifically states that, "The recommended optimal way of introducing an aerosol vaccine is nasal breathing, which is more suitable for geriatric and pediatric populations, permits use of greater antigen volumes, and allows easier monitoring of results."

In other words, the method of administration being referenced ere involves inhalation of a nasal spray, not that of chemicals being released into the atmosphere in large quantities.

In his article, Norris also borrows a pair of quotes from popular songs that discuss the subject of chemtrails; the first being Merle Haggard's line from the song "What I Hate", where he sang, “What I hate is looking up and seeing chemtrails in a clear blue sky today.” At the end of his op ed, Norris also quotes the late singer Prince, who similarly discussed chemtrails in one of his songs, “Dreamer”. The line in question goes, “While the helicopter circles us, this theory’s getting’ deep, Think they’re spraying chemicals over the city while we sleep?"

As to whether Prince had been explicitly referencing chemtrails, the following video clip from 2009 features Prince during an appearance on the Tavis Smiley show, in which the host asked Prince about his song Dreamer:

Indeed, the interview clip above seems to show that late artist had been quite passionate about the subject. Elsewhere, actor Vin Diesel has also aroused chemtrail controversy, following an image posted online in which the actor posed with his fingers crossed, while a similar crossing of contrails appeared in the sky behind him: 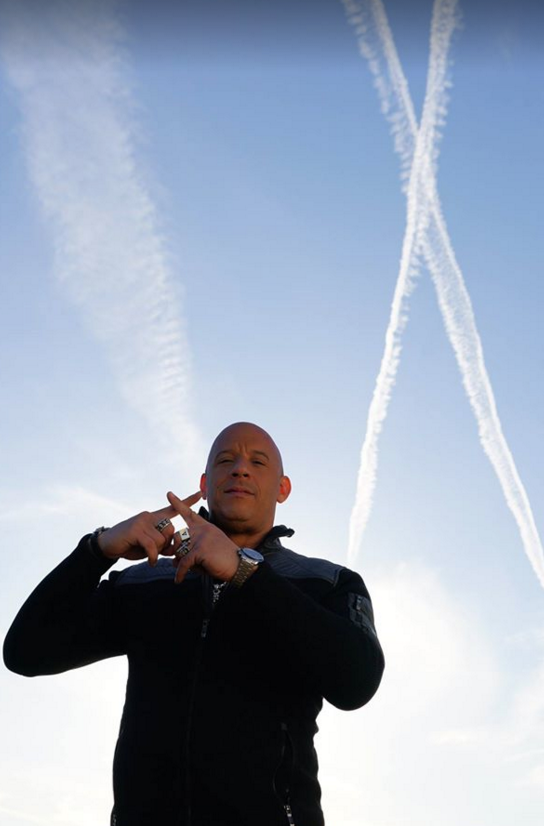 The image was posted by Diesel on his Facebook page. It remains unclear, however, if Diesel himself had been inferring anything concerning chemtrails with the photo.

As to the origins of the so-called "chemtrail conspiracies", early reports began circulating in 1996 that the USAF had been using jet contrails on various aircraft to pepper the skies with various chemical substances. Years later, with the proliferation of the stories, the Air Force responded in an official fact sheet titled "Contrail Facts", in which it stated the following:

The "Chemtrail" Hoax A hoax that has been around since 1996 accuses the Air Force of being involved in spraying the US population with mysterious substances and show various Air Force aircraft "releasing sprays" or generating unusual contrail patterns. Several authors cite an Air University research paper titled "Weather as a Force Multiplier: Owning the Weather in 2025"  that suggests the Air Force is conducting weather modification experiments. The purpose of that paper was part of a thesis to outline a strategy for the use of a future weather modification system to achieve military objectives and it does not reflect current military policy, practice, or capability. The Air Force's policy is to observe and forecast the weather. The Air Force is focused on observing and forecasting the weather so the information can be used to support military operations. The Air Force is not conducting any weather modification experiments or programs and has no plans to do so in the future. The "Chemtrail" hoax has been investigated and refuted by many established and accredited universities, scientific organizations, and major media publications.

The entire Air Force release on contrails can be read online by clicking here. Despite this, of course, the idea has remained very popular amidst various conspiracies that appear online.

In conclusion, rather than there having been an increase in interest in the chemtrail idea as of late, it seems that proponents of the idea, and their popularity in various media, have helped garner a bit of attention. At the end of the day however, there doesn't really seem to be much more good evidence for such theories than at any time before... and hence, perhaps there are more interesting things one might keep an eye out for while watching the skies!