Kid Finds Long Lost Mayan City And Then He Loses It

Coming up with new ideas for science fair projects is hard work. Volcanoes are so last century and clocks can get you arrested. So a teen in Quebec thought he had a great idea when he used Mayan star charts of constellations to predict the location of possible lost Mayan cities and then was proven right when satellite images showed what looked like a buried city with a pyramid exactly where he said it would be. His work was praised by scientists from the Canadian Space Agency, who even gave him a medal of merit. He got to name the city (K’aak Chi which means Mouth of Fire) and his project was entered in the International Science Fair in Brazil in 2017. He probably got an A+ from his science teacher too.

Good thing all of that happened before someone noticed that the “lost city” wasn’t a lost city but an old cornfield!

The story begins a few years ago when William Gadoury, now 15, got the idea that the Mayans may have lined up their cities with the constellations. He found 22 Mayan star maps in the Madrid Codex, placed them over Google Earth images of the Yucatan Peninsula and found that 117 known Mayan cities lined up with stars and constellations. However, one group of stars pointed to a spot on the Mexico-Belize border where there was no city. Was his theory wrong? Was his project destined for an F? 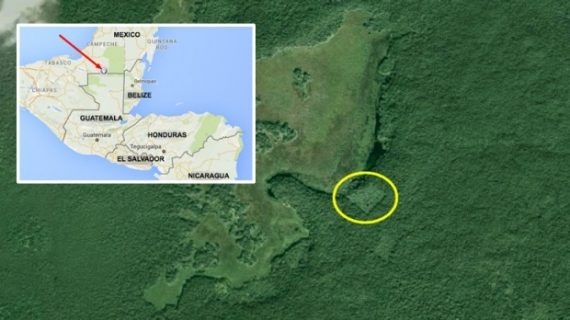 That’s when the Canadian Space Agency (CSA) stepped in and provided William with sharper images from the RADARSAT-2 satellite which showed what appeared to be buried man-made structures, including a pyramid, where the star map pointed. CSA was excited. Archeologists promised to fund an expedition. The Internet was buzzing.

Everything was cool … until last week when William was interviewed by the Journal de Montréal and some other experts read about it and looked at the images. David Stuart, an anthropologist from The Mesoamerica Center-University of Texas at Austin, posted this on social media:

The whole thing is a mess — a terrible example of junk science hitting the internet in free-fall. The ancient Maya didn't plot their ancient cities according to constellations. Seeing such patterns is a Rorschach process, since sites are everywhere, and so are stars. The square feature that was found on Google Earth is indeed man-made, but it's an old fallow cornfield, or milpa.

I'd guess [the field has] been fallow for 10-15 years. This is obvious to anyone that has spent any time at all in the Maya lowlands.

Sorry William. No lost city. No trip to Brazil. No medals. No A+. Maybe he can get a note from the CSA for his teacher.

Next science fair, go with the volcano.