Man-Eating Nile Crocodiles Have Made a Home in Florida

The Nile crocodile, a native of sub-saharan Africa, is a fearsome creature. Fully grown males can reach up to 21-feet-long and weigh up to 2,400 lb and will feast on anything and everything from zebras to small hippos–and yes, occasionally–humans. But a small subsect of the Nile crocodile population has its eyes on a whole new kind of prey: Floridians.

While no human inhabitants of Florida have yet fallen victim to the Nile crocodile, DNA tests show that the world's second-largest living reptile has managed to travel 6,000 miles and establish a home in the Sunshine State. Between 2010 and 2014, three juveniles have been captured; two swimming in the Everglades and one chilling out on a house porch in Miami.

And not only are these well-travelled reptiles surviving in Florida, but they may actually be thriving. One of the captured crocs was found to have grown 28 percent faster than wild Nile crocodiles in their native habitat.

All of which has University of Florida researchers a tad concerned. As Kenneth Krysko, herpetology collections manager at the Florida Museum of Natural History on the UF campus explained in a statement:

The odds that the few of us who study Florida reptiles have found all of the Nile crocs out there is probably unlikely. We know that they can survive in the Florida wilderness for numerous years, we know that they grow quickly here and we know their behavior in their native range, and there is no reason to suggest that would change here in Florida.

So how exactly did this rather conspicuous invasive species manage to invade Florida? The answer appears to lie in the hands of Floridians themselves. The DNA samples of the juvenile crocodiles do not match those of any currently living in U.S. zoos, and while it's rather romantic to think of a team of hardy crocs taking on a several thousand mile voyage–it's not actually possible. 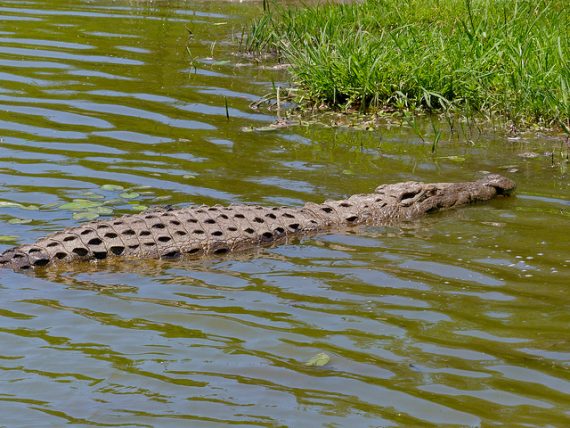 Which means the most likely explanation is that the crocodiles were illegally imported into the U.S. as pets, and then abandoned by pet owners who presumably realized they'd made a terrible mistake. Exactly what would motivate any rational thinking human to decide that a large-jawed carnivorous reptile that weighs the same as a small car would make an excellent pet in the first place remains unclear.

But for now, the Nile crocodile has found itself a new home, alongside Florida's other flourishing invasive species, like the Burmese python and the decidedly less troubling Cuban tree frog.

Life Forms from a Billion Years Ago Discovered