While space may remain "the final frontier", according to recent reports, our efforts to get there affordably still seem to be fairly slow-going. Recent reports of DARPA's new Experimental Spaceplane project, called the XS-1, aims to construct a reusable space plane based on designs submitted by various groups, one of which will be selected in 2017.

Space.com reports that the prospective plane, "at optimal operation, should be able to fly 10 times in 10 days, at a cost of no more than $5 million per flight." Safety checks, refueling, wear and tear from reentry, and other factors often prevent such aircraft from being fully reusable. The proposed XS-1 "would be used primarily as a cheap and fast way to deliver satellites to orbit," Space.com reported, based on a DARPA statement.

That is, of course, if you consider $5 million per flight "cheap". Thus, we begin to see the reasons for the delayed progress, especially in lieu of space program funding issues we've seen over the last several years. Getting off-planet is never really "cheap", although in the coming years, many hope it will continue to become less-costly thanks to such efforts as reusable aircraft like the XS-1.

Speculation remains, however, about other aircraft that may be operating a bit closer to Earth, and whether DARPA or similar groups may be involved with them and their operation.

Roger Marsh recently reported at OpenMinds on an incident that occurred on May 22, 2016, as outlined in MUFON case 76537, in which an Illinois based witness had been commuting between locations near Spring Grove in McHenry County, Illinois. The event occurred at approximately 9:30 PM local time.

The observer reported seeing a large, triangular aircraft "at an estimated height of 200 feet above ground,” which the witness was able to drive close enough to nearly pass directly under it. The driver turned around and returned to the location, and over the course of one minute the aircraft began to execute an apparent banking turn, in which it angled one of its edges toward the ground as it continued to move slowly through the sky.

The Inquisitr website also reported on the incident, noting that, "The sightings have helped to sustain rumors in Pentagon black project conspiracy theory circles that the U.S. government is conducting a series of late-stage flight tests of a new generation of 'black triangle' stealth reconnaissance aircraft."

Illinois has a history involving observation of large triangle aircraft like these, with one notable incident that occurred in St. Clair county, southwestern Illinois, on January 5, 2000. The incident began at around 4:00 AM, on the date in question, and involved police officers from multiple districts that were responding to the early morning observation of a similar large, slow-moving triangular aircraft. One officer managed to obtain an indistinct polaroid photograph of the craft as it moved away from him (more about the St. Clair County case can be read here).

A skeptical position on this incident, offered by Brian Dunning of Skeptoid, suggests that the aircraft had been a conventional blimp giving a private tour; it is unclear why a VIP tour of this sort would have taken place between 3 and 4 AM, and no records directly connecting the incident with the local operations of the American Airship Company, to whom the source of the incident was attributed, have been made available. 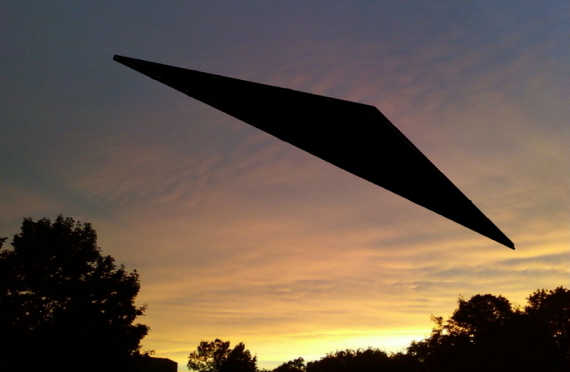 In discussion of "Mystery Aircraft" at its website, the Federation of American Scientists have also gathered information about purported "triangle" craft, where it notes:

"A very intriguing aircraft was been reported in the late 1980s. Some observers claim to have witnessed a vast black flying wing, estimated at between 600 and 800 feet in width, passing silently over city streets in California. The craft moved so slowly one observer claimed that he could jog along with it. The aircraft reportedly executed bizarre maneuvers in which it stopped, rotated in place and hovered vertically, pointing its thin trailing edge toward the ground. This vehicle's unlikely gyrations suggest that it is distinct from the other sightings, and could be a lighter-than-air craft pushed by slow- turning propellers."

More information from the FAS on purported mystery aircraft, and their possible connection to black budget programs, can be found here.

Remarkably, the notion that some, if not the majority of purported "mystery aircraft" may be military projects is often met the same sort of derision that UFO advocates and ET enthusiasts receive. However, dismissive though the modern skeptic may tend to be about such possibilities, one must acknowledge the likelihood that such aircraft, reported consistently over the years and with general continuity of descriptions maintained throughout, can't easily be chalked up entirely to overactive imaginations, or the modern equivalent of "liar's clubs". Even if the distinct minority of cases involving large triangle aircraft or similar objects were the only reliable ones, a case could be made for the existence of new secret aviation technologies that are in use by military officials and agencies.

With the wide number of collected reports involving such craft that are presently available, I would be interested in hearing from readers that believe they have had their own sightings, and encourage contact via email here, or using the comments section below.