Sadness and Stress Appear Detectable in the Air Around Us

Next time a friend tells you that sadness, stress or suspense is "in the air" there's a chance that their statement isn't just melodramatic, but literally true. A study of 9,500 completely unsuspecting movie-goers in Germany found that their responses to specific film scenes altered the chemical composition of the air in the movie theater; suggesting that our emotions really do hang in the air around us.

To examine whether or not we emit silent emotional signals into the air, Jonathan Williams of the Max-Planck Institute for Chemistry in Mainz, Germany attached a proton transfer reaction mass spectrometer (PTR-MS) to the outflow vent of his local movie theater. Which may sound rather impressive, but the undertaking was more an atmospheric chemist's idea of fun. As Williams told the Atlantic, he pretty much expected to determine that the cinema contained a heavy mixture of popcorn and perfume.

But regardless, Williams, with the help of colleagues, meticulously mapped out the events of 16 movies and assigned emotional descriptors to each event. They then used the PTR-MS to take readings of the movie theater's air every 30 minutes. What they found were specific, trackable, replicable change in the air based on specific scenes in specific films.

Hunger Games: Catching Fire, for instance, had a distinct chemical signature across several audiences. When Jennifer Lawrence is fighting for her life, the carbon dioxide and isoprene levels in the air always increased significantly. 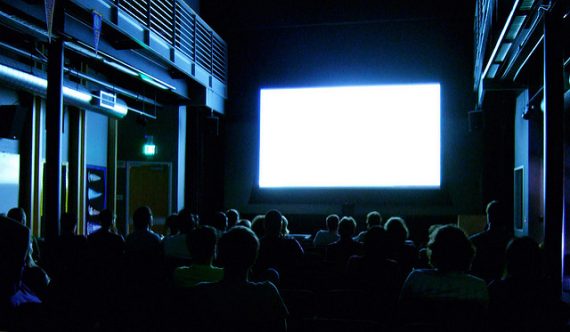 As for why this happened, Williams and his team can presently only speculate, but one theory is that as we tense up and become restless when watching a suspenseful scene, we produce stress hormones or hold our breath and cause our bodies to release a different composition of gas (through breathing!) than we would under normal calm circumstances.

If just one of us does this, the effect may not be to noticeable, but 250 people in a movie theater can literally change the air.

It's not yet known if these changes in the air are simple physical responses to emotional stimuli or a form of communication. As Williams explains:

We have shown there is this invisible, inaudible concert of chemicals that changes regularly in the auditorium. We haven't shown that people can detect them. But, of course, if a signal is there, then maybe it does.