250 million years ago an apocalyptic combination of climate change, volcanic eruptions and rising sea levels sent the Earth into a tail spin and caused the extinction of 96 percent of all marine species. And it's been widely accepted that it took our oceans' inhabitants a very long time to recover. But the discovery of a peculiar new marine reptile fossil throws that theory into question, and suggests that sea life rebounded far faster than we thought.

The aquatic reptile, Sclerocormus parviceps, was discovered in the western Hubei Province of China and is an ichthyosauriform–a bizarre family of ancient fish-like creatures that generally looked rather like dolphins.

The newly discovered Sclerocormus parviceps fossil however, is from 147 million years ago and is not only unlike any other known ichthyosaurs, but is unlike any other known marine reptile. It's one of very few specimens from the period, and features a distinctly un-dolphin-like traits; a small, short, tooth-less snout which it used to suck up food like a syringe, and a long, whip-like tail without any fins at the end. 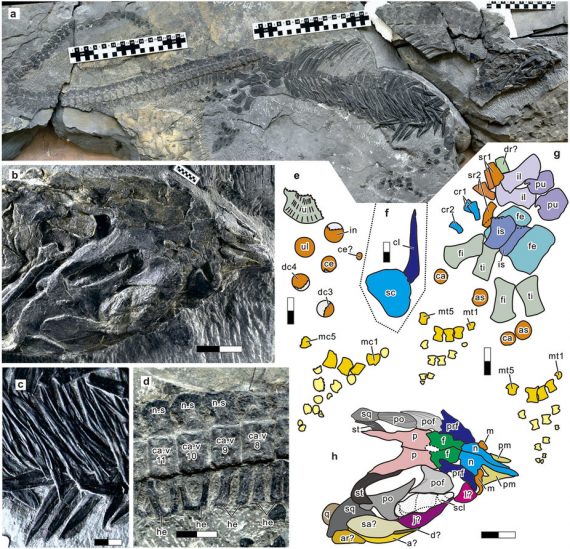 And this changes what we know about evolution after mass extinction in the lower Triassic period. As Olivier Rieppel, The Field Museum's Rowe Family Curator of Evolutionary Biology explained:

Darwin's model of evolution consists of small, gradual changes over a long period of time, and that's not quite what we're seeing here. These ichthyosauriforms seem to have evolved very quickly, in short bursts of lots of change, in leaps and bounds.

The evolution of the Sclerocormus isn't just relevant to what we know about events millions of years ago, in fact, it could provide hints at how we understand modern-day climate change-driven events. Rieppel continues:

We're in a mass extinction right now, not one caused by volcanoes or meteorites, but by humans. So while the extinction 250 million years ago won't tell us how to solve what's going on today, it does bear on the evolutionary theory at work. How do we understand the recovery and rebuilding of a food chain, of an ecosystem? How does that get fixed, and what comes first?