Starfish Make a Big Comeback After a Mysterious Die-Off

It’s nice to get some good news once in a while, especially when it’s a follow-up to a devastating story. It was just over two years ago that massive populations of starfish off the coats of Oregon and Northern California were dying from a deadly and mysterious wasting disease. A new study released this week shows that sea star babies are surviving in surprising and unexpected numbers this season. Is the crisis over?

The echinoderms (they’re not really fish but belong in the sea urchin family) known as sea stars date back at least 450 million years to the Ordovician period, but the last few have been rough on the species. In 2013, sea stars on the West Coast were being found with arms missing, and dead specimens appeared to have melted into slimy blobs. The condition was eventually seen in West Coast waters ranging from Baja California to Alaska, killing up to 99 percent of the population in some areas.

Quick action and intense research helped scientists identify the cause of the wasting disease that eventually killed millions of starfish - sea star associated densovirus. The initial elation after the discovery was followed by a puzzling surprise – the densovirus had been living in sea stars since at least the 1940s without killing them … until 2013.

What started the die-off? Researchers believe there was an overpopulation of sea stars at the time (possibly due to climate change) that caused overcrowding. The densovirus is spread by touch, so the close quarters were ripe for starfish-to-starfish contact and spreading. However, densovirus is not known to cause wasting. Instead, it appears to have weakened the immune systems of the sea stars, making them vulnerable to other bacterial infections and diseases, as well as stress from environmental change.

Back to the good news. Oregon State University marine biologist Bruce Menge reports in his new study in the journal PLOS ONE that a shocking number of baby starfish are now swimming in West Coast waters.

The number of juveniles was off the charts — higher than we’d ever seen — as much as 300 times normal. It wasn’t a case of high settlement, or more sea stars being born. They just had an extraordinary survival rate into the juvenile stage.

Now for more bad news. The reason so many survived appears to be that they had plenty to eat due to the lack of competition from adult sea stars. The densovirus is still there, as are the climate conditions that make the waters ripe for overpopulation again, says Menge.

Whether they can make it into adulthood and replenish the population without succumbing to sea star wasting disease is the big question.

Let’s hope the next story about sea stars is good news again. 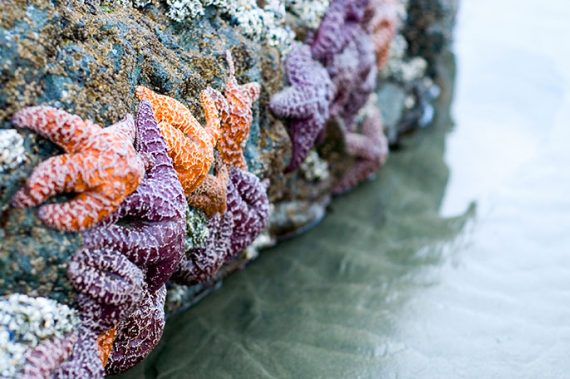