The Bacteria That Controls Planet Earth

Who or what runs Planet Earth? Go ahead, make your list. Finished? Did anyone’s list contain Pelagibacterales? There are more of these bacteria than any other organism on Earth and new research suggests they are responsible for keeping the planet’s atmosphere stabilized through their part in the production of dimethylsulfide (DMS), a key component in cloud formation. Repeat after me: All hail Pelagibacterales – Lords of the Climate!

This work shows that the Pelagibacterales are likely an important component in climate stability. If we are going to improve models of how DMS impacts climate, we need to consider this organism as a major contributor.

That’s from a study published in the journal Nature Microbiology on research led by Professor Steve Giovannoni and Dr. Jing Sun at Oregon State University and scientists at the University of East Anglia. They were studying Pelagibacterales and found that this true ruler of the high seas – there are as many as half a million of them in every teaspoon of ocean water – breaks down the dimethylsulfoniopropionate in marine plankton into dimethylsulfide, a gas which is then released into the atmosphere where it stimulates the formation of cloud droplets, forming clouds that then regulate the amount of sunlight reaching the ocean’s surface, thus regulating the production of plankton and on and on.

If that cycle of events sounds familiar, it’s part of the CLAW hypothesis (named for scientists Charlson, Lovelock, Andreae and Warren) whose 1987 paper proposed that phytoplankton could help regulate Earth’s climate. What was missing from the CLAW hypothesis is how the DMS was actually released and that’s where Giovannoni and Sun’s work on Pelagibacterales completed the cycle. 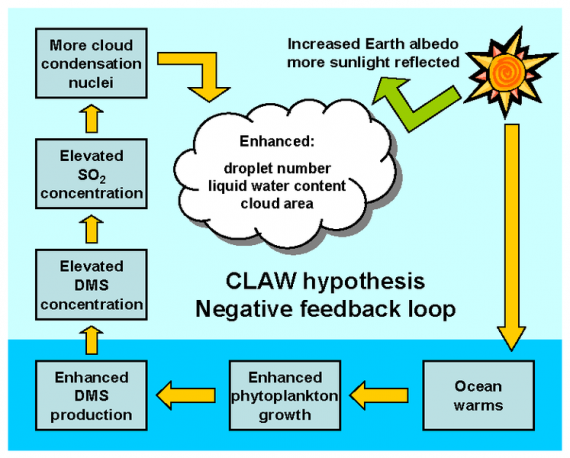 University of East Anglia researcher Emily Fowler highlights the importance of this finding:

Excitingly, the way Pelagibacterales generates DMS is via a previously unknown enzyme, and we have found that the same enzyme is present in other hugely abundant marine bacterial species. This likely means we have been vastly underestimating the microbial contribution to the production of this important gas.

Does this mean that they who control the Pelagibacterales control the climate? Perhaps it’s the other way around - humanity doesn’t have a good track record in controlling bacteria. It does mean that we need to better understand the ocean and its organisms in order to understand climate change.

And The Claw Hypothesis is a great name for a band.