The Future is Flying Alongside You!

Decades ago, forward-thinking individuals might have envisioned the future of the 21st century something like this: airplanes and flying cars would fill the skies over business hubs like Times Square, and robotic servants would be walking the halls of hotels and restaurants, taking orders and filling drink glasses.

That's not quite the future that arrived... at least not yet. However, there are a lot of trends that are still headed in that direction.

Automotive News recently reported on the latest concept for a vertical takeoff vehicle, which is being touted among NASA's more commercial pet projects. "Think of large commuter vehicles that operate like the famous British Harrier Jump Jet fighter planes," wrote Bradford Wernle, "capable of lifting straight off the ground to zoom commuters over slow-moving traffic at 200 mph."

Mark Moore of NASA's Langley Research Center in Virginia was quoted in the article, stating as a matter of fact that, "This is not an imaginary vehicle. It's being developed right now in Silicon Valley." In fact, several companies are working on similar concepts, each aimed at reducing the amount of time spent commuting in urban areas where population growth and the ever-widening business sector are increasing the amount of traffic on the roadways. 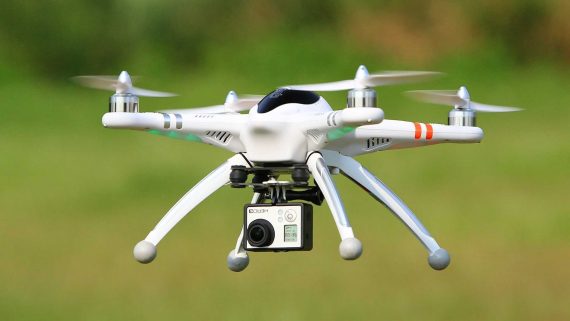 However, transportation isn't all that will be flying in the near future. With the prevalence of civilian drones today, being used for everything from hobbyist sport to film and photography of what once could only be achieved by renting a helicopter, cameras fitted onto various flying apparatus have marked one of the biggest new trends in videography today.

But it's not just drones that are being fitted with cameras; in fact, one company has been working toward perfecting just the opposite: a camera fitted with propellers, capable of flying autonomously, and filming you in HD with the help of facial recognition technology.

The Hover Camera, weighing only a half-pound and fitted with a durable carbon fiber chassis, features a 13 megapixel camera, as well as a 3-megapixel camera and a sonar system on its underside that assists with the camera's built-in collision avoidance system. "While the Hover Camera doesn't have advanced obstacle avoidance, its computer vision is intelligent enough to not run into things," an article at Mashable said.

Zero Zero Robotics, creators of the Hover Camera, prefer not to call their invention a drone, however. Unlike other drones, which are primarily built for flight, the Hover Camera is built with the aim of simple user interface that prioritizes what the camera "sees" and films. When holding the Hover Camera, as one moves to drop it or toss it into the air, the camera will stabilize itself with its four propellers, holding itself aloft at whatever height it is placed in the air by the user. It will then follow them, moving around objects and steering itself around obstacles as it films its owner.

The Hover Camera's operation is similar to other drones designed to follow-and-film, such as the Hexo Plus drone, as well as the similar Lily autonomous camera drone, featured below:

The obvious benefits of drones that follow our movements will no doubt make these popular items in the years to come. It takes little imagination, however, to take such concepts one step further toward their logical conclusion: much like the prevalence of smartphones today, autonomous drones that follow and record our actions (or perhaps even carry out other functions) may one day become the norm, with applications that may include a number of personal safety features.

For instance, autonomous drones which eventually utilize more efficient energy sources (thus enabling longer battery life) may be capable of following hikers in remote areas, and in the event of dangers or disorientation, these devices may be able to report the whereabouts of a hiker so that authorities will know their precise location. Although current GPS systems works in similar ways, one can imagine the benefits of an autonomous drone with similar functionality that, in the event of a hiker's injury on the trail, could be remotely put into an "emergency mode" with the swipe of a smartphone in the hiker's possession (or better yet, with the use of a simple voice command), which sends the drone high into the air directly above the hiker's position, initiating a strobing beacon that can be easily spotted by airborne rescue teams.

As emerging technologies present new possibilities with every passing year, our old notions of what the future would resemble are certainly changing. One thing, however, is for certain: whatever shape it takes, the future will most certainly be flying... and probably right alongside us.

“A Hideous Being With Disheveled Hair”