Mysterious haunted places are not always strictly the domain of decrepit old buildings, desolate landscapes, or dark, scary forests. Sometimes locations with sinister legends and weird phenomena are some of the most stunningly beautiful places in the world, somehow managing to balance natural beauty with strange, ominous tales. This is certainly the case with the gorgeous Pyramid Lake of Nevada. It is a breathtaking location which holds an undercurrent of menace thrumming quietly under the surface, and holds mysteries that have surrounded it since when the very first people settled the area.

Sprawled out like a mirage in the desert and brushing up against tranquil mountains, Pyramid Lake lies nestled within the Truckee River Basin, located in southeastern Washoe County of the U.S. state of Nevada, around 64 km (40 miles) from the city of Reno. It is an ancient lake, and is a remnant of Lake Lahontan, a vast body of water which once covered most of northwestern Nevada during the last ice age. The name Pyramid Lake derives from the numerous soaring limestone cone-shaped formations, called tufa formations, that line the shores and jut up out of the water here, with the largest of these being Anaho Island, looming out over the water like the ruin of some inscrutable ancient civilization. The lake is well known for its crystal clear waters, pristine beauty, and picturesque vistas, as well as for being a sanctuary for vast amounts of birds including geese, pelicans, gulls, owls, grebes and ducksand, as well as a home to numerous endangered species of fish. While most people might not realize it, they most certainly have seen the lake at some point, since its image is used as the default screen saver for the Apple iPad devices. Another thing that many might not realize is that this spectacularly beautiful locale is steeped in dark history, and tales of strange creatures, mysterious disappearances, and sinister curses.

The surrounding area of Pyramid Lake has long been inhabited by members of the Native Paiute tribe, which is comprised of three related groups of Native Americans; the Northern Paiute, from eastern California, western Nevada and southeast Oregon, the Owens Valley Paiute from the California-Nevada border, and the Southern Paiute, who occupied the Colorado River basin and Mojave Desert. The Paiute of Pyramid Lake were known as the Cui Ui Ticutta, meaning “Cui-ui eaters,” with Cui-ui referring to a type of fish endemic to the lake. The tribe eked out a living out in this harsh desert environment by catching fish such as the Cui-ui, the Tui chub and Lahontan cutthroat trout, as well as gathering the sparse food resources from the desert such as grasshoppers, rodents, deer, and rabbit, in addition to various berries, roots, seeds and nuts.

The tribe lived in peaceful seclusion for centuries before the lake was discovered and mapped by American explorer John C. Frémont in 1844. It was indeed Frémont who gave the lake the title of Pyramid Lake. From here, European settlement of the area began in earnest, with settlers trickling in from the east looking for a new life in these badlands. This new settlement had disastrous consequences for the Paiute, as miners chopped down pinyon trees, a major food source for the Natives, and cattle ranchers caused the destruction of the already sparse vegetation with their herds, as well as competing with the Paiute for these grazing lands. While the Paiute people at first tried to live in harmony with the white settlers, and traded with them regularly, most of the tribe did not appreciate the disruption to their way of life and resented the presence of the settlers on there ancestral lands.

This simmering animosity would eventually boil over into violence, as Paiute raiding parties fanned out to indiscriminately murder settlers on their land. These raids graduated to full skirmishes and culminated in the the Paiute War, also known as the Pyramid Lake War, which occurred in 1860 around Pyramid Lake and consisted of two violent engagements that killed around 80 settlers and an unknown number of Paiute. The violence would continue sporadically until both sides agreed to a cease-fire in August of 1860.

These bloody engagements fit in well with some of the dark legends of the Paiute people, and many of them blamed the arrival of the white settlers and the bloody war on a dark curse long said to hang over the lake. One old legend among the Paiute was that the lake was the home of a race of mermaids, and that one of these beings once fell in love with a village man. The story goes that when the man brought the mermaid to the village to announce his intentions to marry her, they were met with disdain and the man was told to take the strange creature back to the water. It is said that the mermaid was so infuriated with the way she had been treated and her banishment from the tribe that she cast a curse on the lake, promising that all who lived there would forever experience hardship and misfortune. It is this curse, many said, that had brought the settlers and ignited the war. 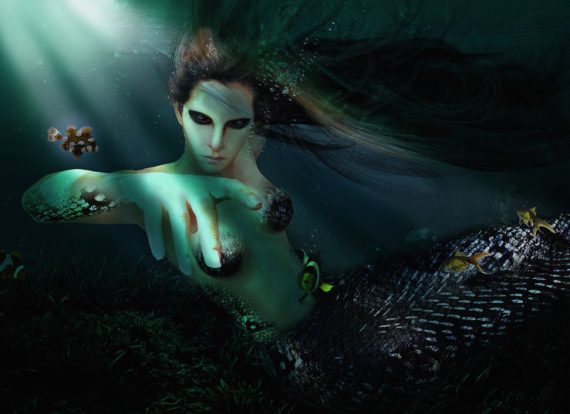 The mermaid curse is certainly not the only ominous legend associated with Pyramid Lake. Since even before settlers arrived there were long tales of ghostly, demonic spirits inhabiting the clear waters, such as serpents and a type of water imp that were known as Water Babies. These specters are said to look like babies with visages twisted by rage and hate, and they are claimed to lurk under the surface waiting for victims to wander too close, which they will then drag down to their deaths. The story of how these bizarre creatures came to be varies. One version propagated mostly by early European settlers was that the Paiute had the disturbing habit of disposing of unwanted or deformed newborns by throwing them into the lake to drown. This was allegedly done to weed out the weak and keep the tribe strong, and it is these abandoned, murdered babies that prowl the water. It is a ghoulish story to be sure, but is likely based on exaggeration aimed at making the Natives look like savages. The Paiute themselves say that the Water Babies are the result of a great serpent who one day emerged to feed on the baby of a mother who was washing clothes. The demonic serpent then took the form of the baby and began devouring the mother as well, only stopping when it made a deal with the village shaman that it would be allowed to prowl the lake in exchange for letting the mother live.

No matter which version of the story one subscribes to, or indeed whether one believes any of it at all, there is certainly an eerie phenomenon often reported from the lake that seems to lend credence to the ghostly presence of Water Babies in Pyramid Lake. To this day, both visitors and locals alike often report hearing the disembodied voices of babies crying or the laughter of children wafting from out across the still water, which are often heard even by people who have never heard of the old tales of Water Babies. Eerie indeed, but even more so considering that hearing these voices is said to be a bad omen, with a local saying being 'If you hear them you will have bad luck, if you see them you are dead.’ The phenomenon is said to be particularly prominent in the spring, when such reports experience a surge.

Oddly, spring is also a season in which the lake experiences the most accidents involving fishermen, who flock here to fish for the very large Lahontan cutthroat trout. In addition to freak boating accidents, missing equipment, and technical trouble, there are the more sinister stories of drownings and disappearances. Locals claim that every spring, at least one fisherman vanishes without a trace out on Pyramid Lake. Some attribute this to the legendary Water Babies said to stalk the depths, while others blame it on a combination of bad weather conditions, a sharp increase in water depth close to shore, which drops abruptly down to 350 feet, and the effects of copious amounts of alcohol. Swimmers and scuba divers have also mysteriously drowned in the lake, curiously mostly in spring, with some of the bodies never found. 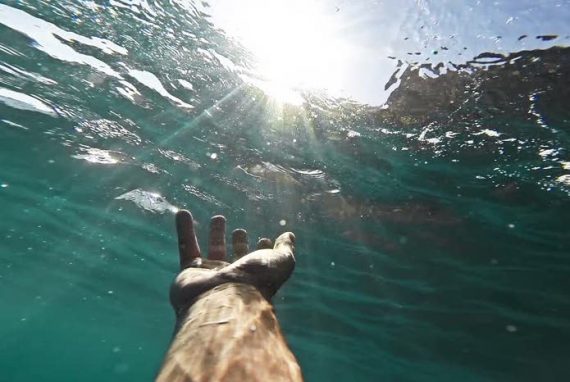 Perhaps even stranger than the disappearances are the occasional cases of the corpses of drowning victims in Pyramid Lake turning up floating around in nearby Lake Tahoe and vice versa. How could this be? One theory is that the bodies floated there. Pyramid Lake is fed by the Truckee River, which is mostly the outflow from Lake Tahoe, so the idea is that the corpses from Lake Tahoe somehow floated over the spillway and were swept down the river to Pyramid Lake, although this does not explain how a body could go the opposite direction. Another theory is that Pyramid Lake and Lake Tahoe are connected via a series of mysterious subterranean tunnels and river systems, through which the corpses might travel from one place to the other. For now, no one really knows, and it adds another creepy layer to the mysteries of this place.

Pyramid Lake remains an enthralling place of mystery and beauty, marrying pristine natural splendor with dark mysteries we may never fully understand. It certainly changes the way one might look at that lake sitting on your iPad screen. For those wanting to visit this magnificent and spooky place for themselves, remember that since the lake sits on the Pyramid Lake Indian Reservation, permits are required to fish, boat, or camp here. It might also be important to remember to be careful when near the water here, pay attention to the sound of babies crying, and maybe go in a season other than spring. Just in case.