The Mysterious Man in the Iron Mask is Finally Unmasked

No, he’s not Leonardo DiCaprio nor Richard Chamberlain nor Douglas Fairbanks. And he’s not the secret twin brother of Louis XIV of France. Will his identity force the rewrite of films and novels based on the secret of the mysterious Man in the Iron Mask or will they instead spawn a new action film starring Ben Affleck? Maybe his identity should stay a secret.

The real Man in the Iron Mask (L'Homme au Masque de Fer) was a Frenchman arrested in 1669 (or possibly 1670) under the name Eustache Dauger. Held in many jails, including the the Bastille and the Fortress of Pignerol in Italy, he allegedly had only one jailer, Bénigne Dauvergne de Saint-Mars, who kept the man’s real identity a secret by keeping him hidden in a second, more insidious prison – a black velvet mask. He died on November 19th, 1703, during the reign of Louis XIV.

The mystery and circumstances inspired the philosopher Voltaire to claim that the mask was iron and the man was the older, illegitimate brother of Louis XIV. In The Vicomte of Bragelonne: Ten Years Later (published in serial form during the late 1840s), Alexandre Dumas kept the iron mask but changed the secret identity to Louis XIV's identical twin. That’s the version which loosely inspired countless films titled The Man in the Iron Mask and other variations about an additional Musketeer or a lady in the same predicament. Historians threw out most of this, agreeing only that his name was Eustache Dauger, the mask was velvet and only worn occasionally and that the man was someone’s valet. 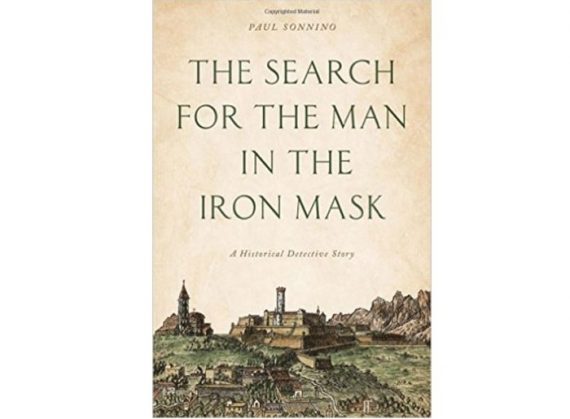 In his new book, The Search for the Man in the Iron Mask: A Historical Detective Story, Paul Sonnino, professor of history at the University of California, Santa Barbara, gives his evidence that Eustache Dauger worked as a valet for the treasurer of Cardinal Mazarin, the principal minister of France during Louis XIV’s reign. Why was he arrested and imprisoned?

What I was able to determine was that Mazarin had ripped off some of his huge fortune from the previous king and queen of England, and that Eustache was arrested years later just as Louis XIV was trying to con their son, the present king of England, into joining him in a war. Dauger must have blabbed at the wrong time. He was informed when arrested that if he revealed his identity to anyone he would immediately be killed.

Sonnino also says that historians kept the prisoner’s full identity secret for so long because they want history to be “antiseptic, moralistic, sensible” while real life is “much more complicated than that.”

The Valet in the Velvet Veil has a nice ring to it. Who will play the lead? Joseph Fiennes in a period piece? Chris Pratt in an action drama? Will Ferrell in a comedy? Tilda Swinton in a bizarre twist?