In Japanese folklore, the deep sea giant oarfish is a messenger of Ryūjin, the dragon god of the sea. The appearance of a dead oarfish on the surface or the shore is considered by many to be a sign of an impending and possibly severe earthquake. What does it mean when the ocean throws two 100-pound oarfish completely out of the water and into a rice paddy? Is it too late to run?

Reports from Taiwan say a 5.6 magnitude earthquake occurred late on April 27th in Hualien County on the western side of Taiwan. Over 30 aftershocks occurred over the next several hours, ranging in magnitude from 3.5 to 5.6. During that time, a mud volcano erupted in Pingtung County, about 180 miles south of the earthquake area in southern Taiwan. The mud volcano tossed two 4.4 meter (14.4 feet) giant oarfish (Regalecus glesne), each weighing nearly 100 pounds, out of the water and onto land. Locals say it took five men to carry each of the oarfish. 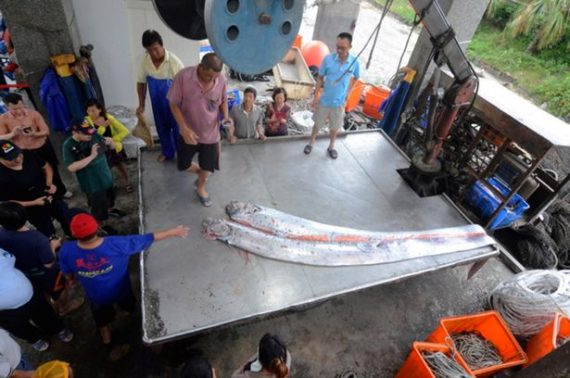 Mud volcanoes are not lava-spewing volcanoes. The “mud” is a mixture of hot gases, water and earth that forms a boiling mix deep beneath the surface. The hot slurry stays trapped until a fissure or a fault from an earthquake gives it a path to the surface, where the boiling mud erupts like a small volcano. As the mud hardens, it can form a cone anywhere from 1 to 700 meters high.

According to reports, four different eruptions from the mud volcano opened in a paddy, destroying the entire field. Farmers were forced to dig trenches to allow the slurry to flow away.

Is the appearance of the giant oarfish being thrown from the mud volcano a bad sign? Yes, says Kuo Kaiwen, director of Taiwan Earthquake Monitoring and Report Centre.

We predict that the mud volcano eruption may last for two to three days. And it may be accompanied by some magnitude 5 earthquakes.

Are the giant oarfish brought by the mud volcano a bad omen for Taiwan? There have been no further reports of severe earthquakes so far, but the swarm of 30 last week could mean more are on the way. Did the oarfish get lost on their way to deliver the message from the dragon god and get sucked into the mud volcano? Is the fact that they were tossed out of the water instead of floating to the surface a really bad sign?