A Liquid Ocean on Pluto is Still a Possibility

What does Pluto have to do to get its planetary status back? How about show evidence that, even at its great distance from the Sun, it still has liquid water sloshing beneath its surface? A new report suggests this is more than a remote possibility for this remote dwarf planet

That’s amazing to me. The possibility that you could have vast liquid water ocean habitats so far from the sun as Pluto — and that the same could also be possible on other Kuiper belt objects as well — is absolutely incredible.

Brown University Ph.D. student Noah Hammond was blown away when he plugged new data from the New Horizons space probe into his “thermal evolution model” – a computer model that attempts to recreate the thermal history of Pluto. As he reported in his study in the latest edition of the journal Geophysical Research Letters, previous models have been based on the theory that, while Pluto may have once had liquid oceans, they have since frozen solid, forming a compact type of ice known as “ice II” that would have caused the dwarf planet to contract.

Making Pluto an even smaller dwarf does not bode well for its return to the list of planets. Then came the pictures and data from New Horizons.

We don't see the things on the surface we'd expect if there had been a global contraction," Hammond said. "So we conclude that ice II has not formed, and therefore that the ocean hasn't completely frozen.

If Pluto’s ocean isn’t frozen, what is keeping it liquid? It appears an Oreo cookie effect may be creating a creamy, slushy layer. Geothermal activity in its core are creating high temperatures from below while nitrogen and methane ice on the surface are keeping the heat from escaping, says Hammond.

Is he a scientist or a bartender? Hammond believes that this evidence of possible liquid water on Pluto bodes well for finding it on other dwarf planets and remote space objects in the Kuiper Belt.

Will this increased girth due to an underground liquid ocean boost Pluto’s size enough to make it a planet again? Perhaps it may just have to be satisfied with “Most Interesting Place in the Solar System to Visit.” 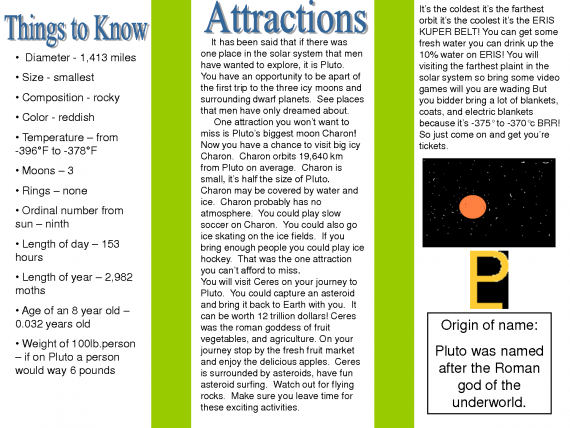