The presence of 14 skeletons, fully intact aside from the notable absence of their heads, in the archaeological remains of one of the world's oldest known cities has been a puzzle to academics for years. But now, a team working at the Neolithic Çatalhöyük site in modern day Turkey believes they have an answer; the corpses were subject to vulture excarnation--or defleshing by griffon vultures--prior to burial.

Çatalhöyük arose sometime around 7500 BC, and at its height was home to some 10,000 people. As a city of densely packed mudbrick houses that had no doors or windows, people entered their homes through holes in the roofs, with the rooftops serving as streets, and the deceased buried under the floors of their homes.

Many bodily remains have been uncovered intact, the skeletons positioned in tight fetal positions that suggest they were prepared for burial. 14 of these skeletons show signs of having been buried without their skulls, but only one bears marks on its bones that suggest defleshing by human hand.

As for the other 13, as Kristina Killgrove reports in Forbes, archaeologists have long suspected that vultures may have had a hand in the process; Çatalhöyük's murals and sculptures prominently feature the fearsome birds.

Now a team of researchers believe they might be closer to proving the role of vultures in the burial preparations of these headless Neolithic individuals, and have published their findings in the Journal of Archaeological Sciences: Reports.

While their evidence is presently somewhat circumstantial, they present a compelling case. Studies of griffon vulture excarnation have shown that the birds will remove and feast upon the flesh of a carcass, but leave ligaments and tendons intact--which would explain why the Çatalhöyük remains have held in the fetal position rather than being uncovered as a scattered pile of bones. Additionally, the bones lack the knife marks, sun-bleaching or evidence or carnivores that would suggest other means of flesh removal. 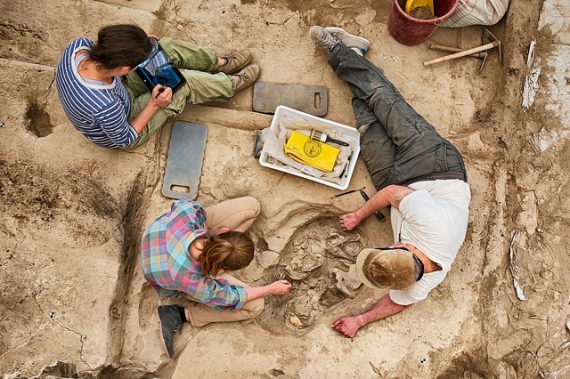 Furthermore, it would have made significant sense for the remains to be defleshed before burial--keep in mind that they were interring their loved ones under the floor of the central room of the house. A defleshed body would be decidedly less odorous. If the fresh bodies were placed on the roofs of the house, then local griffon vultures would've had easy access to the remains, and been able to provide a useful, if rather grotesque, service.

And perhaps most compelling, as Killgrove explains:

Wall paintings at Çatalhöyük include representations of vultures attacking headless bodies, and there are skulls of griffon vultures embedded in plaster walls in some of the houses.

As for what happened to the deceased humans heads, well, that's another matter.

Photos CC by 3.0 SA The Catalhoyuk Project and William Warby on Flickr

Stories in Stone: Legends of Giants in the Southeastern United States