After 20 years of excavation at Stagira, Greece, archaeologist made a stunning pronouncement on the 2,400th anniversary of the birth of Aristotle: he has successfully located the famed classical philosopher's tomb. It's the discovery of a lifetime, but for one issue; Sismanidis's findings have been met with a resounding chorus of "um, hold on a minute..." by the archaeological community.

So why is Sismanidis 'almost certain' of his discovery? The ancient city of Stagira, which lies in the Greek region of Macedonia, is recognized as the birthplace of Aristotle, sometime around 384 BC. And for two decades archaeologists have been painstakingly excavating the site.

It's at this site that Sismanidis has uncovered a hastily-constructed vault, which reportedly stands close to the ancient town square, features a marble floor from the Hellenistic period, and has a trove of coins from the period of Alexander the Great (one of Aristotle's students) and ceramics from royal pottery contained within. There is an altar outside of the vault and the site offers panoramic views of the region.

As Sismanidis explained to The Guardian:

I have no hard proof, but strong indications lead me to almost certainty [that this is the tomb of Aristotle].

But archaeologists and classical scholars alike do not appear to share Sismanidis's level of certainty, and are waiting for him to publish an academic paper on his discovery. The problems with the site, and the circumstances of Aristotle's death, provide several layers of confusion.

What we do know is that Aristotle died in 322 BC in what was then Chalcis on the island of Euboea, and there's some debate as to what happened to his remains. Sismanidis cites that the historian Ptolemy, who lived from 90 to 158 AD claimed that Aristotle was cremated and his remains returned to Stagira where they were housed. Within the academic community, there's dissent as to whether or not this transfer of his remains ever actually happened. 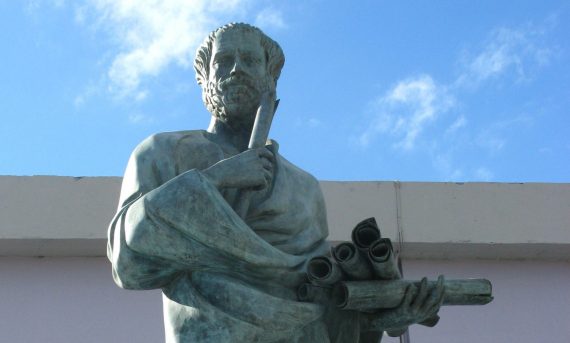 The one thing that could provide real credibility to Sismanidis's claims would be the presence of an inscription. But, alas, one has not been found. Oddly, a tomb was uncovered in 1892 in Chalcis with an inscription that, according to Forbes, read "[B]IOTH [A]PISTOTELOU – Biote, daughter of Aristotle." That discovery too has never been credibly identified as Aristotle's tomb, as there is no record of his having had a daughter.

There is also a significant degree of cynicism over the timing of Sismanidis's announcement. So is this the tomb of Aristotle, some archaeological wishful thinking or an academic hoax? Time may or may not tell.

Christopher Mellon, UFODATA and the Release of UFO Documents