Boxing Champion Muhammad Ali Had a Fascination with UFOs

With the recent loss of boxing champion Muhammad Ali, his numerous achievements, as well as his broader influences on society, have been brought to the forefront of public consciousness. In addition to being arguably the most visible sports icon of the 20th century, Ali's legacy included his outspoken and often polarizing political views, as well as his religion, his personal life, and even his love for magic and card tricks.

What was less well-known was the fact that Ali had also held a long fascination with UFOs, having reportedly seen them himself on several occasions, and often in the company of other witnesses.

The first of many observations of strange things Ali claimed to see in the skies occurred in 1970, at which time he described seeing a brightly illuminated object in the early morning sky along with one of his trainers:

“I happened to look up just before dawn, as I often do while running, and there hovering above us was this brilliant light hanging as if by an invisible thread. At first I thought it was a beacon projected from a helicopter,” Ali explained, “but moments later a similar object passed in front of us.” The second UFO had a glowing red trail behind it.

“I brought it to the attention of my trainer, who was standing nearby. We watched them come from behind the skyline and move slowly across the sky for at least 15 minutes. The best I can describe the sighting is to say they were just round and big.” Ali says he later found out there were other UFO sightings made that same night, “including a report from a pilot about to land at Newark Airport.” 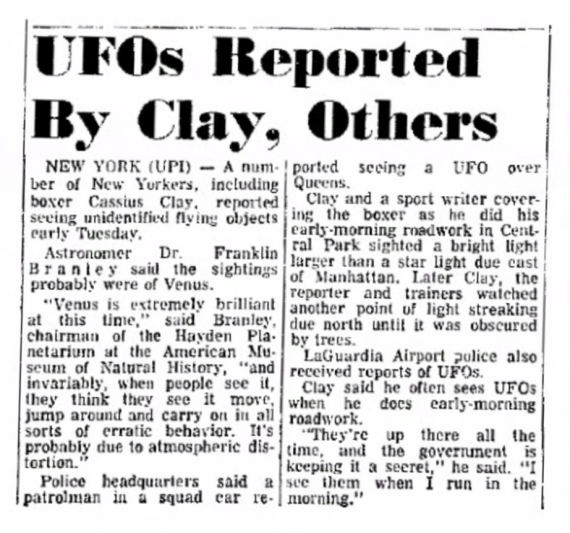 The sighting (which took place prior to Ali legally changing his name from Cassius Clay) was reported by numerous others as well, with a number of reports having been sent at the time to LaGuardia Airport. This incident wouldn't be Ali's only interaction with the unknown, however; on another occasion the boxer described seeing a large, cigar-shaped object pass above his vehicle one evening:

“The closest [sighting] happened when a cigar-shaped ship hovered briefly over a car I was a passenger in one night driving north on the New Jersey Turnpike. What a sight that was. We could see the shadow made by the UFO as it passed over the pavement of the road in the light of the full moon.”

Researcher Timothy Green Beckley was able to interview Ali upon learning about The Champ's UFO sightings, by arranging to join the boxer for one of his early morning runs in Central Park, New York. In an article at his blog, Beckley recounts the story of meeting Ali that morning, along with several subsequent trips up to the cabin in New York where he trained.

It was during one of these meetings with Ali that he told of a second sighting of one of the unusual "cigar shaped" UFO craft:

“At first I thought this flicker was the North Star rising in the heavens. However, within moments, I could tell I was watching something out of the ordinary... Before I could blink my eyes, this ‘light’ had come down toward the mountains until it hovered right above the valley here. I knew I couldn’t be dreaming. Sure ‘nough, it was still there. This had to be one of those big ships they talk about! The UFO was streamlined and shaped sort of like a cigar, but blunt on both ends. I couldn’t see any windows or anything, but I’m certain there must have been people onboard.”

The following night, Ali observed the same aircraft once again, claiming that on this occasion one of his more skeptical associates, business manager Gene Kilroy, who had previously said of Ali's UFOs that he "chalked it up to a vivid imagination."

However, joining Ali and observing the UFO the second night it appeared caused him to change his position on the subject:

"There was something mighty peculiar happening over the camp that night. I looked up and saw this thing – this UFO – doing acrobatics up among the stars. The sighting changed my previous opinion concerning UFOs."

It would be hard to determine what all of the objects Ali and his associates claimed to see over the years might have been, although the affect they had seems clear: Ali maintained a passion and interest in the subject ever afterward, incorporating their apparent presence into his broader range of beliefs and spirituality. During a recent conversation with Beckley on his meetings with Ali, he told this author that Ali had seemed drawn to the UFO subject -- and thus toward belief in it -- based on the way that the subject had been interpreted by his religious teachers in the Nation of Islam, which has long looked at UFOs within the context of religion.

Altogether, Muhammad Ali would claim to have seen UFOs on sixteen occasions in his life. Thus, along with being arguably the most widely-recognized sports star in American history and culture, he was likely the one to have had the most UFO sightings, just as well.