The extraordinary natural feats of chameleons are not just limited to their color-changing capacities-- it turns out that they have seriously sticky saliva that enables them to catch prey up to a third of their body weight with just their tongue.

We're all largely familiar with the sneaky hunting tactics of chameleons; they hang out motionless until an unsuspecting insect passes by, and rapidly unleash their tongue, reaching as far as twice the length of their own body. The unfortunate cricket or locust is then, just as rapidly, pulled back into the mouth of the chameleon.

But oddly, scientists had never before studied exactly what was happening with the tongue of the chameleon in order to pull off such an odd and efficient hunting maneuver. Which is where a team from the Université de Mons in Belgium comes in. As study co-author Pascal Damman explained of the experiment:

It was very easy.

The team took a single Chamaeleo calyptratus--the most common type of chameleon--and put it on one side of a sheet of glass. They then put some crickets on the other side of a piece of glass, and in short order they had saliva samples from the chameleon on the glass. (And, presumably, one rather irked chameleon). 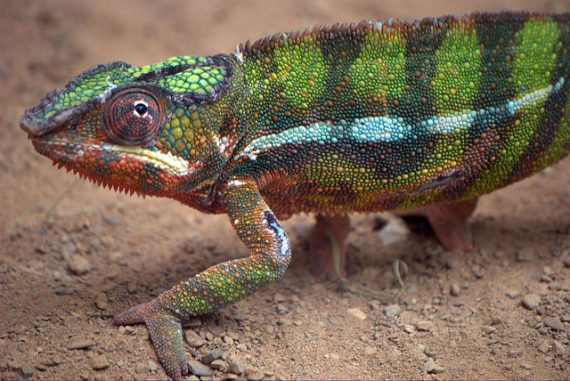 They then analysed the saliva by rolling small steel beads over the sample so as to measure its viscosity. And it's very, very viscous; 0.4 ± 0.1 Pa-s to be precise, which is roughly 400 times as viscous as human saliva, and about as sticky as honey.

When the chameleon's tongue is fully extended and makes contact with its prey, the tongue forms a cup-like shape which increases the amount of saliva meeting with the chameleon's dinner, and enables it to snag food up to 30 times its body weight. If its saliva were the same viscosity as a human's then the size of its prey would be reduced by a factor of 50.

Perhaps surprisingly, Damman stated that the finding was "completely unexpected," but it might provide clues as to the hunting secrets of other creatures such as salamanders and frogs.

Man in Ukraine Claims He Killed a Chupacabra With His Pitchfork