Is This the TR-3B? New Footage Of Alleged “Triangle UFO” Surfaces

The latest in a series of videos appearing online that purportedly show a strange, unidentified triangle-shaped aircraft, has come to the attention of UFO researchers following a submission to the Mutual UFO Network (MUFON).

The video, which the Express featured on its site recently, shows an odd, slow moving object in the distance, which appears on camera for several minutes. The object appears to have a red, green, and white light, each marking one of the three corners of the object (see below). 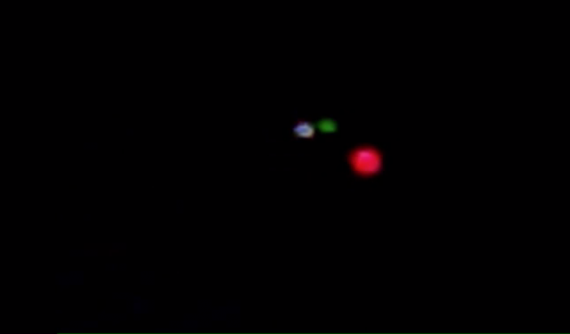 The video, which was obtained by MUFON, can be seen here.

The object in the recent MUFON video appears to have some resemblance to another aircraft, which was filmed over Longview, Texas one year ago. At that time, the observers labeled it the "Texas (Belgium) Triangle", due to it's similarity to an object that appeared throughout a famous wave of sightings over Belgium in the early 1990s.

MUFON has been collecting a number of similar reports over the last several weeks. As reported by Roger Marsh at MUFON's website, in one recent observation the witness described seeing a large, dark triangle aircraft as it passed at an altitude of just 500 feet as it moved over Shelby County, Ohio. Initially, the witness believed the object had been "a motorized glider."

Additional reports came from areas that include the town of Indian Land, South Carolina, where a witness reported that on May 26, 2016, the craft was observed as it quickly moved through the sky outside their residence:

“I see a white light with red and blue lights blinking on it flying by. I thought it was just a plane, but what really caught my attention and made me get up and run to the window was how fast the object was moving. I have never seen a plane or anything for that matter move that fast before.”

Additional reports have been made as far away as Britain, where one witness observing the sky in the early evening managed to capture a photograph of an odd, triangular object at it hovered in the sky at some distance.

According to the witness report:

“There was a black triangle hovering in the sky,” the witness stated.“We didn't take our eyes off it. Very slowly it moved to the north. After approximately 10minutes and to the left of it a black orb appeared. There was another object just below and to the right of the orb that looked like a line and seemed to follow the orb.”

The reports of the alleged triangle "UFOs" appear within weeks of one particularly interesting video, filmed by a motorist in Florida back in May, which appeared to show what some hold to be the best recent footage of one of the unidentified "triangles", as seen below:

Speculation about the origins of these aircraft have included the theory that many sightings have been of a secret military aircraft. A study carried out by the National Institute of Discovery Science in 2004 noted that, "The United States is currently experiencing a wave of Flying Triangle sightings that may have intensified in the 1990s, especially towards the latter part of the 1990s. The wave continues. The Flying Triangles are being openly deployed over and near population centers, including in the vicinity of major Interstate Highways."

Space.com similarly reported on NIDS and its findings, which suggested a link to known flight corridors used by the US Air Force. Their conclusion at the time had been that the aircraft are, in likelihood, a variety of stealth blimp being operated by the Department of Defense.

To date, no explanation that offers a conclusive determination on these aircraft has been offered. Hence, the debate as to their origins, and ultimate purpose, remains very much alive; and in likelihood, it is a conspiratorial debate which will continue for some time.

What Do Ancient Texts Tell Us About Cataclysms in Human Prehistory?