Listen to the Strange Music of 13 Billion-Year-Old Stars

If asked what space sounds like, most of us would probably assume that it is completely silent out there--some kind of auditory-barren vacuum. Yet it turns out that stars do make sound--if you go inside them. A team of astrophysicists from the University of Birmingham has done just that, recording the 'songs' of ancient stars in the Milky Way, and creating some distinctly strange music.

The recordings come from four stars in a 13-million-year-old cluster in the Milky Way called the M4--one of the oldest star clusters in our Galaxy. You can listen to the stars sing in chorus above, or listen to each star on its own in this interactive display put together by the University of Birmingham.

The sounds that the researchers captured come from resonant oscillations trapped within the stars, and they're not just fascinating to listen to. These sounds also provoke minuscule changes, or pulses, in the brightness of stars, and can provide us with a lot of information about our Galaxy. By measuring the tones of the oscillations, it is possible to determine both the mass and age of a star in a discipline called astroseismology. 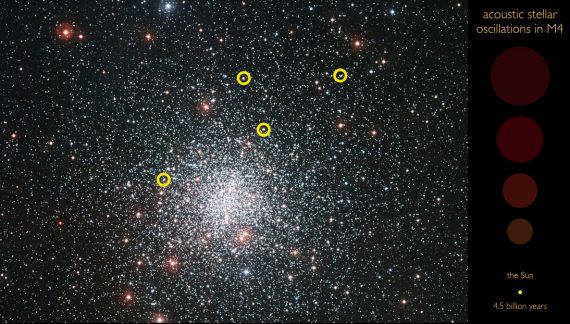 As Professor Bill Chaplin, a leader of the international collaboration on asteroseismology explains:

Just as archaeologists can reveal the past by excavating the earth, so we can use sound inside the stars to perform Galactic archaeology.

Indeed, using astroseismology, astronomers can uncover precise and accurate information about some of the oldest stars--far older than those that have been studied using other methods.

Dr Andrea Miglio, from the University of Birmingham's School of Physics and Astronomy, who led the study, said in a statement:

We were thrilled to be able to listen to some of the stellar relics of the early universe. The stars we have studied really are living fossils from the time of the formation of our Galaxy, and we now hope be able to unlock the secrets of how spiral galaxies, like our own, formed and evolved.