The ancient Greek navy were involved in some epic battles, utilizing large triremes--warships named for their three rows of oars. And key to their success was the safe storage of the triremes when not at war to protect them from warping, worms and the like. In order to do so they built six shipyards off the coast of Athens, which have recently been discovered by marine archaeologists, and form one of the biggest structures of the ancient world.

The discovery was made by the Zea Harbor Project, who in 2010--while looking for evidence of naval bases at Zea and Mounichia--were led to a site on the northern side of Mounichia by local fisherman.

The area is currently used for fishing and yachting, but once the Zea Harbor Project's divers had cleared away modern debris, and worked through heavily polluted waters, they uncovered six ship sheds. Each of the sheds is between 23 and 25 feet high and are 164 feet-long, and were constructed to house hundreds of the trireme warships 2,500 years ago. 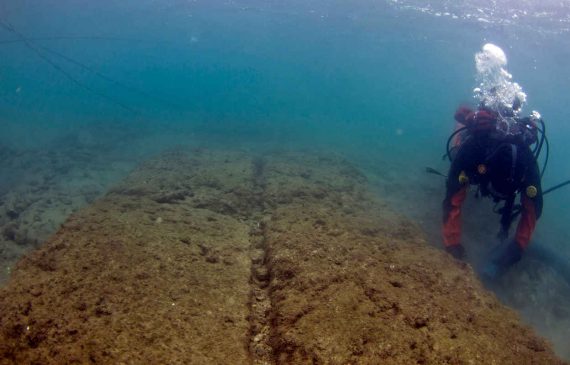 While the triremes were undoubtedly mighty ships for their day, exposure to the elements would have left them prone to drying out, warping, and destruction by ship worm--a mollusk that buries itself into boat wood. And keeping these warships in good, non-warped shape was pretty darn important to Ancient Greece.

As Bjørn Lovén from the University of Copenhagen, who worked on the project, explained in a statement:

Based on pottery and carbon-14 dating from a worked piece of wood found inside the foundations of a colonnade, we dated the ship-sheds to around 520-480 BCE, or shortly thereafter, and this means that these sheds probably housed the ships which were deployed to fight the Persian invasion forces during the famous Battle of Salamis 480 BCE.

The Battle of Salamis was a key naval feat for Greece, when they defeated a far larger Persian military invasion.

It is difficult to predict what would have happened if the Greek fleet had lost at Salamis, but it is clear that a Persian victory would have had immense consequences for subsequent cultural and social developments in Europe. The victory at Salamis rightly echoes through history and awakens awe and inspiration around the world today.