Meteorite Crashes Through Roof in Thailand

It must have come from outer space.

That’s what a grandmother in Phitsanulok, Thailand, told local police (and probably her insurance agent) after what appeared to be a meteorite crashed through the roof of her house and hit a picture of a monk.

The incident occurred on June 28th in the capital city of the Phitsanulok Province in lower northern Thailand. At about 7.26am, 65-year-old Bualom Chalomprai and her 75-year-old husband, Kittisak, were having breakfast when they heard an explosion, followed by what sounded like gunfire as an object crashed through the ceiling, hit a monk's picture on a wall and then struck the floor, where it broke into five pieces. The largest chunk was the size of an egg (5 cm/2 inches), weighed about 300 g (10.5 ounces) and was scorching, says Bualom.

I picked up the largest chunk and let go quickly as it was very hot. In fact twenty four hours later, it was still warm.

The Chalomprais suspected vandalism an reported the incident to the police. However, when a neighbor asked if they saw a flash in the sky at around 7:26 am and they heard reports of a loud boom in nearby districts, they decided to take it to Naresuan University, where Sarawut Tuantam, head of the department of physics, declared it a meteorite.

The rock's crust was charcoal black, indicating it had been burned entering Earth's atmosphere at very high speeds. 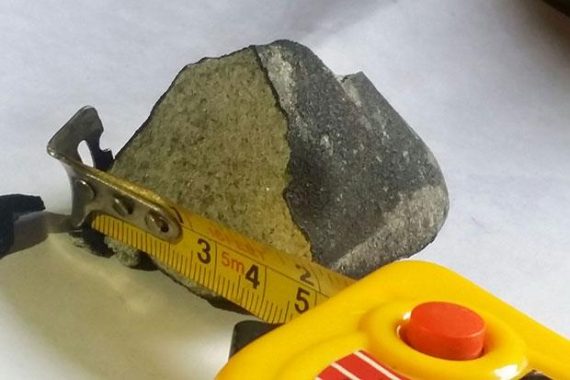 The object contained a high concentration of iron but was not radioactive, so the professor gave it back to Bualom as a keepsake. The grandmother hopes it will bring her good luck.

Let’s hope it at least works better than her roof or the monk on the wall.

Minimum Wage in This Mesopotamian City Was Beer