Move Over: Self-Honking Horns For Self-Driving Cars Are Here

The self-honking horn for the self-driving car is ready for its selfie. Well, almost. Google announced in its latest monthly report on the company’s self-driving car program (which you’d have time to read if you were in one) says that its engineers are teaching the cars how to honk in a variety of situations. Is the self-flipping-bird far behind?

You might think it’s as simple as attaching an accident sensor to a robotic hand poised over the knob on an air horn, but the engineers at Google X working on the self-honking project (motto: We Give a Beep!) say it’s a complicated exercise in decision-making and evaluating the appropriateness of various warning sounds.

If another vehicle is slowly reversing towards us, we might sound two short, quieter pips as a friendly heads up to let the driver know we're behind. However, if there's a situation that requires more urgency, we'll use one loud sustained honk.

Friendly heads-up beeps? Who does that anymore? The engineers say their goal is to teach the cars to respond like experienced but tolerant drivers. They first tested the self-honkers by blasting the horn inside the self-driving car only, so riders with nothing else to do could monitor the situations and effectiveness of the horn software’s responses. Horn-worthy situations included seeing a car blindly backing out of a driveway, a vehicle going the wrong way down a one-way street and a car just backing up slightly to make room for a pedestrian crossing.

Feedback from the passengers (ranging from check marks on an evaluation form to blood-curdling screams of “Don’t honk at those Hell’s Angels!”) was used to fine-tune the algorithm before it is released to honk the horn on its own at other accident-about-to-happen vehicles.

The Google report on self-honking does not address what the self-driving cars should do in annoying or potential road rage encounters. Should it make honk decisions based on the other car’s state license plate? Bumper stickers? Size of the driver? Number of tattoos?

Google is currently testing a fleet of 24 Lexus RX450h SUVs and 34 of those cute little pod-shaped cars on public roads in California and three other states. Until the self-honking horn is tested in New York City during rush hour, they can keep them. 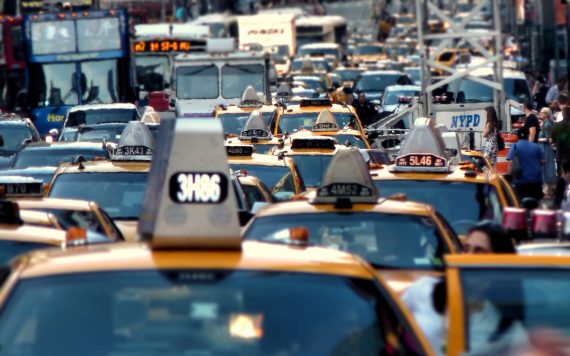